There's plenty of hype surrounding airborne Riverina prospect Participator who has been heavily backed from $5 to $2.90 favouritism on TAB for Saturday's $100,000 TAB Highway (1200m) at Rosehill Gardens.

Even with 59kg and conceding weight and experience to older opponents on a rain-affected track (rated a Heavy 8), the punters have stepped in. 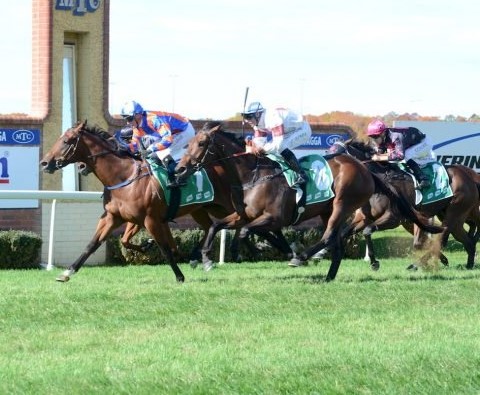 The Tim Donnelly-trained Participator winning his maiden at Wagga back in May. Image by Trackpix

Riverina great Tim Donnelly and his precocious three-year-old by Contributor (Ire) contest the Class 3 event again with Mathew Cahill aboard, his only ride on the day and significantly sacrificing a full book and healthy percentages at Wagga Wagga.

Their brilliant home track double, and planned Highway, was the focus on prime-time racing radio a month ago when Donnelly’s stablemate Kitzbuhel landed a betting plunge in a “Gardens” 1800m episode.

It was known then that Donnelly’s best was yet to come. The bush telegraph alerted from last season.

As a two-year-old Participator won unextended in fast time at home, was spelled and then resumed in Class 1 a month ago and was headed for a Highway after he spaced rivals by a widening four lengths with 58.5kg at $1.90 off a priming trial.

And Donnelly’s history, starting with the great TJ Smith riding Kingston Town trackwork, and eventually training a Group I Ryder Stakes winner in 1998 with Quick Flick, was reinforcement.

However, Donnelly and connections baulked at the hefty 59kg.

“We anticipated no more than 58kg, there’s a comparison with that good horse from here Another One, weighted on 58kg for a Highway after he won an identical Wagga 2YO and a Class I to us,” offered Tim, a keen form student.

“He progressed to win our regional qualifier and ran second in the Country Championships Final to Art Cadeau. He was unplaced in his first Highway and then won with 56kg off a claim.”

It’s always been a task for a three-year-old to give weight to older experienced horses but he’s a talent and couldn’t have done any more into Saturday.

“The major factor is lack of experience. Older horses with form and more racing when it’s 18 runners.

“I hope the handicappers are right. This is his first road trip, we’re coming race morning, but he’ll travel OK, he’s a relaxed, tractable type and it’s cool weather.”

Still from Wagga to Sydney is enduring enough for trainer and horse. It’s 461km, near six hours and finally city traffic congestion.

Just another factor the inexperienced three-year-old has to cope with, along with topweight and a likely heavy track. He’ll need to be every bit as good as the reports.

However, if weight is the issue, logic prevailed. If Participator remained in the Riverina to contest weaker grade, he’d be weighted on 60kg or more for a quarter of the prizemoney.

On Saturday he’s a pronounced favourite and Cahill sacrificing a full book at Wagga is the strongest possible lead for bigger occasions.

Meanwhile “The Gardens” at present is rated a Heavy 8 with plenty of rain forecast for Friday.