Trainer Logan McGill says he never had any doubt that jockey Nash Rawiller would make an impact when he returned to the saddle mid-year. 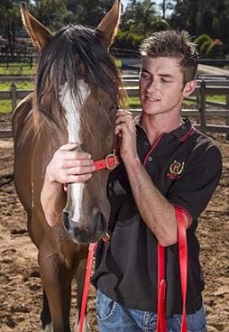 And he’s equally sure Rawiller is the right man to guide in-form galloper Gold Fields to victory in the Group 2 $250,000 Quincy Seltzer Villiers Stakes (1600m) at Randwick on Saturday.

The Mornington trainer, and former jockey, is one of few people who saw firsthand how much work the champion rider put in ahead of his comeback at the end of July.

“His family had a house down here during the time he was off and he was always so hungry to get back you knew he was going to hit the ground running,’’ McGill said.

“I don't think he will lose that drive. He's really rejuvenated and is riding better than ever.’’

McGill, who turns 31 next Monday, started out as an apprentice to Mornington trainer Mark Riley as a 15-year-old, Riley is good friends with Rawiller so their association covers a fair amount of time.

The connection between McGill and the Rawiller family has been strengthened recently through Nash’s son Campbell starting his apprenticeship with McGill.

Nash has had just the one ride for the McGill yard since his return and was narrowly beaten on Written Choice at Moonee Valley a few weeks ago.

“It'll be a thrill for everyone if Nash can ride a winner for us but to win a Group 2 would be even better,’’ he said.

“They're just a really good family and now Campbell has come to be apprenticed to me and he’s ticking along well.’’

Gold Fields will be McGill’s first Sydney runner and he arrives at the Villiers with successive wins to his name and the honour of sending jockey Stephen Baster out a winner in the Group 3 Sandown Stakes (1500m) at his final race ride.

McGill has no doubts Rawiller will get along nicely with the seven-year-old, an $11 chance with TAB after drawing ideally in gate four.

“Stephen Baster has had a really good association with him and he is a strong rider himself,’’ he said.

“Being an on pace horse and a horse that keeps finding the harder you ride him you couldn't find a better match than him and Nash.

“We have the luxury of our horses working reverse way every second day so he has worked on that leg plenty of times. I think he will adapt to it very well and I don't see it posing an issue.’’

Up for grabs to the winner of the Villiers is a valuable exemption into the Group 1 Doncaster Mile on Day 1 of The Championships.

McGill said he has options aplenty with Gold Fields, including an invitation to Dubai, in the new year and the Villiers result will go a long way to mapping out his autumn.

Stephen Baster wins on Gold Fields in the Sandown Stakes.

The Villiers will be Gold Fields’ tenth start this preparation – he won the Wodonga Cup at his tenth run in last campaign – and he’s won five races at 1600m including the Sale Cup two starts ago.

It’s been a month since the gelding’s last start win and McGill has used a Traralgon barrier trial to keep him up to the mark.

“I don't think he could have trialled much better the other day,’’ he said.

“It's been a recipe that's worked for him in the past, a month between runs and trialling him.

“In between the trial and doing work on Tuesday morning he hasn't taken a backward step which is great. Provided he travels up well he will be there in really good order.

“When he gets up and racing well he maintains it. We do space his runs, he hasn't been over taxed, and he is a horse that enjoys his work.

“While he is going good it's nearly impossible to pull up stumps.’’