Memories of respected trainer Russell Cameron will be at the forefront for connections of Sunlight when she takes her place in the $7.5m Iron Jack Golden Eagle at Rosehill on Saturday.

Part of the Golden Eagle concept is that 10 per cent of the prizemoney is to be donated to a charity selected by the owners of each runner and Sunlight is racing for a cause close to her owners and trainers’ heart.

Back in September, Cameron died at the age of just 61 from Alzheimer’s Disease so it was fitting that Dementia Australia be Sunlight’s charity.

The mare’s co-trainer Calvin McEvoy explained his family’s connection with Russell Cameron, and son Scott who Cameron trained in partnership with for a short time, goes back decades.

“Dad (co-trainer Tony McEvoy) used to live with Russell when they were in their 20s back in Adelaide so they’ve been close for a long time,’’ McEvoy said.

“My connection with Russell was when I was younger. When I was 16 or 17 and going over to Melbourne with a horse or two, strapping for the weekend, we would always stay at Russell's stable's so he and (wife) Judy were always fantastic to us and looked out for us.

“He was a great guy with a fantastic outlook.’’

Cameron trained a number of outstanding gallopers including Toledo, Bomber Bill and Iglesia to name just a few.

A third generation trainer, he relinquished his license last season due to the effects of dementia after almost 30 years training and a lifetime in racing.

McEvoy said the idea to support Dementia Australia was raised by a number of Sunlight’s owners but particularly Ray Pawsey and Robyn Parker and it made sense to choose that charity.

“I never saw Russell in hospital but talking to Ray and Robyn who were visiting him once a week it was not good,’’ McEvoy said. 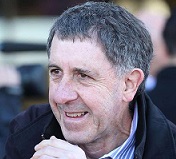 “Scott did an amazing job to handle it while training horses.

“Dementia is such a brutal disease and it hits close to home, we felt like it was a good charity to choose and it would be nice to give them as much as we can.’’

It’s entirely possible Sunlight could control the outcome of the Golden Eagle given her natural on-pace racing style and the fact she jumps from gate 15 in the 16 horse field.

McEvoy said his initial reaction was disappointment but has come around to the draw not being quite so bad so long as she’s able to dominate the race like in her Group 1 wins down the Flemington straight.

“I'm pretty relaxed with the draw in the fact that she's a fast horse and I don't think he will need to bustle her to get there,’’ he said.

“If she was a horse that was an on pacer but not quick out of the gates it would have me worried. But she normally pings the gates and musters quickly so it will be up to Luke (Currie).

“We've got to trust her. She's never let us down really.

“She's won $5 million in prizemoney, three Group 1s and a Magic Millions, placed in the Slipper and TJ. She had an off day the other day on paper but she is in tremendous order.’’

Those two words – on paper – are interesting looking at Sunlight’s tenth placing in the TAB Everest.

McEvoy puts the four-year-old’s performance down to being thrust out of her comfort zone in a race run at high speed and where she was pushing to keep up.

That run and the fact Sunlight hasn’t been tried beyond 1200m is a good part of the reason she’s a $26 chance with TAB in the Golden Eagle but the race has been pegged as the fifth and final run of her campaign from the time it started.

Sunlight's effort in the TAB Everest on October 19

The McEvoy stable wanted to try her at 1400m in the Golden Rose last year but a change of mind saw her stay in Melbourne that spring so it’s been on the radar for a while.

The report after the TAB Everest from jockey Luke Currie took the McEvoys by surprise somewhat so they’re more than happy to be forgiving.

“Funnily, Luke actually said she's run really well so he felt something different than we all saw,’’ McEvoy said.

“All of her fantastic performances have been when she can jump and control the race, have a midrace breather then kick again.

“When Nature Strip ran that fast she was chasing the whole time. He said it was the first time she'd been out of her comfort zone and he was pleased with the run.’’