Jockey Lee Magorrian is rapt to be given the chance by leading trainer Chris Waller to partner three horses at Warwick Farm on Wednesday that he rode to last start provincial wins and, naturally, is keen to convert the rare opportunities in the city. 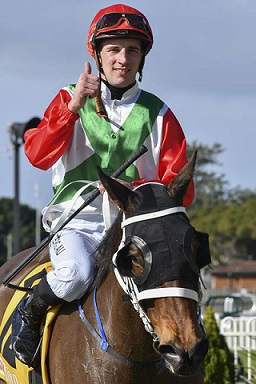 It’s rare because Magorrian has only had eight rides on city tracks this season, hampered in the past four months by coronavirus restrictions, but, like the horses he’s riding, comes to town in form.

Last week he rode The Lord Mayor into second place in the Listed Grafton Cup for Waller who provides him with the mounts on Oscar Zulu, Saigon and Misty Summer at the Farm.

“It’s good that he has the faith in me to keep me on these horses,’’ Magorrian said.

“It’s a big operation and you see all the time someone wins on a horse and they get replaced, because they bob up somewhere else or someone gets in first. When you ride for a big team you always take it with a pinch of salt but it’s a good opportunity.”

Magorrian is looking forward to partnering debut winner Oscar Zulu in the Press Statement @ Vinery Handicap (1200m) and said his Gosford win two weeks ago had plenty of merit.

That win came on a soft 7 and the heavy ground doesn’t concern Magorrian.

“I knew he would run really well. I jumped him out a few weeks before that, I thought 1100m might see him out at his first start but Chris is always on point and it was a good win,’’ he said.

“He’s out of a mare who performed on a wet track in New Zealand so that’s always a good sign going into heavy ground.

“Riding on heavy tracks is all about keeping them balanced and helping them through the ground and they’ll find the line better.’’

Interestingly, Oscar Zulu’s dam Ininthree was the first foal of Parfore who famously produced the likes of Terravista, Ball Of Muscle, Tiger Tees and Super Easy.

Magorrian said the gelding, early $3.70 favourite with TAB, gives him the impression in his work that there is plenty of upside so he goes to Warwick Farm confident he can produce his best.

“When you ride him in trackwork he’s quite laid back and always looking for a feed bin so it’s hard to get a gauge on him,’’ he said.

“You always feel like there’s something more there. Hopefully with the race experience he has improved and I think he will be hard to beat.’’

A wet track doesn’t concern Magorrian with impressive first-up winner Saigon ($11) in the 2020 Yulong Stallions Handicap (1400m) despite her maiden win coming on a good surface at Newcastle.

He said the more important factor will be keeping the filly in a rhythm in the going and she showed enough last preparation to say that a city win is within her reach.

“All I had to do was get a nice soft run around the corner and get her out and let her finish off the way she wanted to,’’ he said.

“I don’t think the heavy will be an issue for her. She has quite a big knee action and I think the ground will suit her.’’

Misty Summer returns to the city in the TAB Handicap (2200m) with Gosford wins either side of an excusable failure at Warwick Farm on June 17.

The mare, $5 with TAB, was outsprinted in a race dominated by leader Shangani Patrol that day and Magorrian is hoping for a more genuine tempo this time around.

“She’s a tricky horse to ride, she can get hard on the steel when she races,’’ he said.

“She failed at Warwick Farm last time on a heavy but then back to Gosford on a soft 7 she handled it well. There’s a bit of speed in the race, hopefully I can get her into a good head space.’’