Champion jockey Kerrin McEvoy has found a target to aim at for the rest of the season and is setting his sights on reaching the 2000 career wins mark. 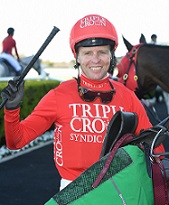 The 39-year-old ticked over 23 years in the saddle in March and sits on 1976 wins so without a premiership or winter Group 1s to focus on he said he’d like to get as close to the milestone as he can by the end of July.

At present McEvoy, under the COVID19 protocols, is restricted to riding in the metropolitan area and there’s 21 city meetings remaining, including Randwick on Saturday, this season so it’s possible for him to achieve the goal in town but he says it’ll be easier if the situation changes.

“It depends on when we can open up a bit more in relation to where we can ride so we’ll wait and see how it unfolds,’’ he said.

“It sounds longer than what it feels, 23 years, but I’ve been pretty lucky along the way.”

Among his 1976 wins to date are 76 Group 1s in five countries, plus the first two runnings of The Everest.

Given his role as Darley’s number one rider in the early 2010s it’s not a surprise his most successful trainer combination is with Peter Snowden, and that’s continued in partnership with Paul Snowden, with 444 wins and counting.

The unbeaten Peltzer has been exposed to a heavy track in a barrier trial and McEvoy hopes that stands him in good stead in the Darley Handicap (1300m).

Peltzer came from off the pace to win on debut then led all the way at Randwick, on a soft 5 track, two weeks ago so McEvoy said he can head onto the track confident the colt can adapt to whatever unfolds.

“He was in front after a stride the other day so we’ll wait and see,’’ he said.

“I’ll probably ride him similarly, see how he jumps and what the rest of the field do.

“He attacks the line no matter whether he’s up in front or coming from behind and he has that good So You Think streak in him.’’

Canberra filly Tejori, pegged by trainer Nick Olive as a potential Kosciuszko contender later this year, has a Randwick heavy track failure from her first preparation to cast some doubt over her chance of making it back-to-back TAB Highway (1000m) wins.

But she was spelled after that flop, where she raced wide, and McEvoy prefers to judge her by her two wins this preparation.

“She’s three from four and she got through the same ground as Peltzer on the same day,’’ he said.

“She comes back a furlong which is interesting but you’d have to say she’s a top chance.

“She’s a nice filly, she rides a bit bigger than what she looks. She’s not blessed with a great action but she’s another one with a nice amount of ability.’’

After riding Miss Fabulass to second placing on a heavy track in the Group 1 Coolmore Classic earlier this year, McEvoy said the ground should hold no fears for the blueblood in the Octagonal Handicap (1400m).

Peltzer wins at Randwick on May 9

The four-year-old hasn’t raced since a closing fourth in the Group 2 Emancipation Stakes (1500m) on March 28 but trainer Kris Lees warmed her up with a trial win a couple of weeks ago.

“She’s been running great without winning since she came back to NSW and she ran really well in that Coolmore,’’ he said.

“She was back in a slowly run race (in the Coolmore) and hammered to the line and really quickened up in the ground so it doesn’t worry me with a heavy track.

“She’s not badly weighted with 58.5kg so she sets up well on weights alone.”

A win by Misteed would be McEvoy’s 99th for the Snowden partnership and he said the heavy track will give her every chance to post her first win since the first meeting of this season.

The mare chased home boom galloper Masked Crusader third-up two weeks ago in a sign she’s getting back to her best form.

“She was doing her best work late, she’s two from four on heavy so that gives you confidence,’’ he said.

“It’s going to be the last race so I wouldn’t be too worried about the draw. Masked Crusader looks a star in the making so 4.3 (lengths) behind a potential Group horse isn’t bad form.’’