He’s the one horse that could change the face of the 2019 TAB Everest if he makes a statement at Randwick on Saturday. 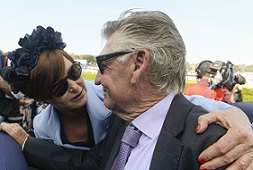 His name is Classique Legend, his trainer Les Bridge speaks bullishly about his ability, he’s been labelled a future star and if he wins the Group 2 $500,000 Bowermans Office Furniture Shorts (1100m) he’ll probably be the new Everest favourite.

Bridge isn’t known for wasting words and he’s made it clear he thinks Classique Legend is the real deal – while taking on the best sprinters in the land on a wet track at your fifth start isn’t ideal that’s the kind of faith he has in the grey.

“In a perfect world I would have liked to give him another preparation to take on a race like the Everest but it’s not worrying me because the horse has come up so well,’’ Bridge said.

“He’s going up against the best, we’ll just have to see what happens, I’d love a fast track because I know he accelerates on that.

“It’s just bad luck we’re running on a wet track. We’ve got to run him, he has to have two runs before the Everest so he’s running.’’

Classique Legend is rated an $8 chance in TAB’s all-in Everest market but he’s the $4.20 favourite to topple at least five of his potential Everest rivals, depending on whether the likes of Sunlight, Pietrata and In Her Time line up after Santa Ana Lane's scratching, in The Shorts.

His only defeat in four starts came on a heavy track at Rosehill on Golden Slipper Day but he did have a hard run and Bridge said that run and the fact he bounced out of it to win the Group 2 Arrowfield Sprint (1200m) is enough to settle any worries.

“It is what it is and he did get through it that day at Rosehill so it’s not as though he can’t handle it,’’ he said.

“His recuperative powers are terrific and that’s why I’m not concerned about him.

“But let’s face it, Redzel is going to be awfully hard to beat. He’s nearly a champion in the wet.’’

Bridge regards jockey Nash Rawiller as a “good substitute’’ for Kerrin McEvoy, who has ridden the grey in all his starts and both trials this time in, following McEvoy’s decision to stay on Redzel.

When asked about what he thought when owner Bon Ho’s racing manager Carmel Size informed him they’d bought an Everest slot to tackle the $14 million race with Classique Legend, Bridge was very sporting.

“When it’s that sort of prizemoney you give it a shot,’’ he said.

“It’s a different world. I started training when there was no prizemoney and you used to have to get something out of them by backing them.

Classique Legend wins a trial at Randwick on September 10

“She has a really good horse and in this game you just take it race by race.’’

Rawiller said he’s excited to have the opportunity to partner the four-year-old on race day after being heavily involved in the build up.

He’s as confident as he can be that Classique Legend will handle the conditions, without having ridden him in a race, and comes across as a huge fan.

“I have had more to do with him this preparation that any other horse since I’ve been back,’’ Rawiller said.

“The horse has the best attitude of any horse I’ve ever ridden. He’s a relaxed horse, you put him with company and he’s a different horse and he just wants to win.’’

Classique Legend will progress to the Group 2 Premiere Stakes (1200m) on October 5 before the TAB Everest at Royal Randwick two weeks later.