The talented grey added a touch of class to the $150,000 Listed Bob Charley AO Stakes (1100m) at Randwick and he didn’t let his supporters down in holding off Southern Lad and leading Kosciuszko hope Snitz. 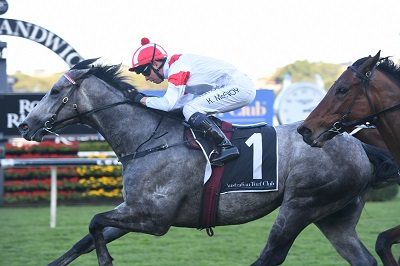 All roads now lead to The TAB Everest for Classique Legend and his owner Bon Ho, who owns a slot for the $15 million feature to be run on October 17.

Kerrin McEvoy has ridden the son of Not A Single Doubt, that would have been lost to Hong Kong if not for Coronavirus lockdowns having twice been in quarantine, in six of his nine starts and perhaps his most telling post-race quote was regarding the four-year-old’s recent physical development.

“(The break) could have been a blessing in disguise, it has given him time to fill into his body and he went out a boy and came back a man, so let’s hope he can show us that later in the spring,” said McEvoy.

It’s easy to forget that Classique Legend has still only had nine starts.

“I was a little bit nervous coming here today,” revealed McEvoy, “I walked the track yesterday and I thought it would be a little bit drier than what it was. He handled the track well enough but is better again on a firmer surface.”

“They were in form sprinters, Snitz is no slouch, and I feel he has a better turn of foot on a drier surface. When he won the Arrowifield here he was dynamite.

“He has got here today, ticked the box in having the run, we’ll just assess what we do with him now. It’s good to have him back.”

Carmel Size said it was unlikely that Classique Legend would have another run over the winter.

“It’s all up in the air in the moment, it’s very hard to get a guide on the horse because he does everything so easily but (The Everest) is a long way away,” Size said.

“We might see him back at the trials, the plan was to run here today and then maybe trial him before keeping him ticking over in the stable.

“It’s just so exciting for him to get to the races and win given that he isn’t fit yet.”

We’re only the first week into winter yet mentions of Everest contenders were also floating around in Queensland after Rothfire annihilated his rivals in the G1 JJ Atkins at Eagle Farm.

“He is some horse, I am lost for words,” gushed trainer Rob Heathcote, who has never hid his admiration of the horse openly comparing him to Buffering

“He climbed his Everest today, and note I did use that word, ‘Everest’. He needed to do that today against a really good field of two-year-olds.

“We’ll give him a nice break then set a program in concrete as we get closer, there are a couple of races in Sydney and maybe today opens the door. I did an interview with miRunners having bought a slot for The Everest and they said that he is certainly in the running.”

Results and replays for Royal Randwick on Saturday.