Kris Lees has favorites in two of the four feature races at Rosehill Gardens on Saturday and is confident both In Her Time and Graff will run well. 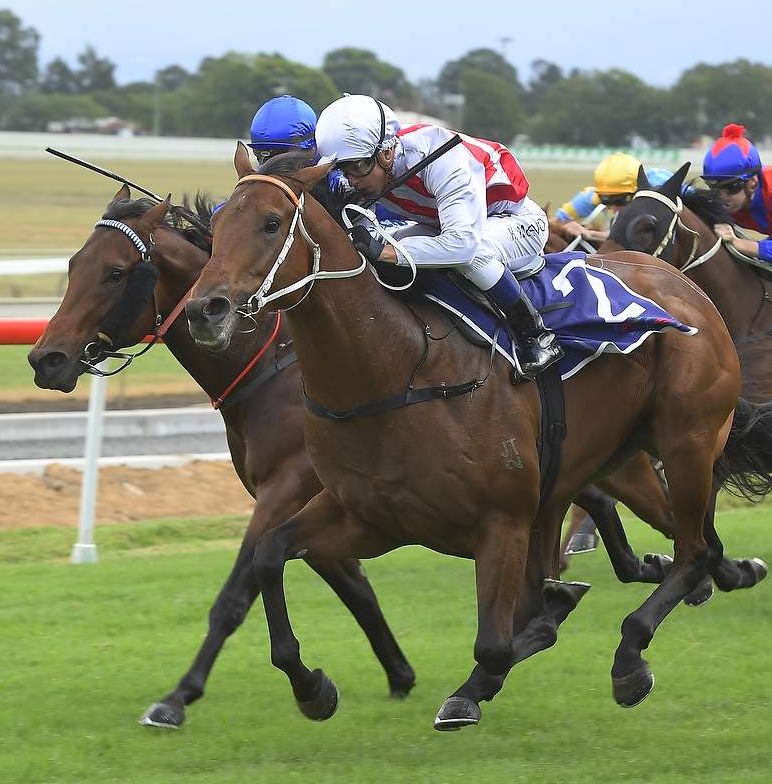 Graff (Kerrin McEvoy) wins at Hawkesbury as a two-year-old. Image by Bradley Photographers

Hugh Bowman, the regular rider of now-retired Winx, partners In Her Time for the first time at her final start, and Lees understandably is hoping for a similar result as when the wonder mare bowed out in glory at Royal Randwick 12 months ago.

In Her Time struck trouble soon after the start and was responsible for an excellent performance when fifth to Greyworm in the Group 3 Hall Mark Stakes (1200m) at Randwick last Saturday.

She tackled the “boys” then and goes back to meeting her own sex under set weights and penalties conditions, meaning she is attractively placed with 60kg in view of her record.

“In Her Time does not appear to have taken any harm from last Saturday’s race,” Lees said. “Getting back on to a good track is definitely in her favour. I’m sure she will run very well.

“She has to be our pick ahead of stablemate Asharani, especially as that mare has drawn awkwardly.”

In Her Time has won twice (including the 2018 Group 1 The Galaxy, 1100m) at Rosehill, won her only start (the 2017 Group 2 Millie Fox Stakes) over the Rosehill 1300m, and has never been unplaced (winning once) from three starts at the distance.

Including Graff, whom Bowman also rides, Lees has three representatives in the Gold Rush; the others being Tactical Advantage (Josh Parr) and Agent Pippa (Dolan).

Graff, who won on debut over the Gold Rush 1100m at Rosehill as a two-year-old in April 2018, races for the first time under the banner of Australian Bloodstock and clients along with Aquis Farm, where he will eventually stand at stud.

Lees has made a number of changes, removing some gear and putting blinkers back on and adding a tongue tie.

“Graff has trialled and worked well, and is ready to head back to the races,” he said. “His Rosehill record is good (two wins and two placings from five starts) and he invariably races well fresh. I’m happy with him and also look forward to seeing the horse run boldly.”

“He is fitter for two runs back, will appreciate getting back on to firmer footing and has drawn the inside.  Agent Pippa is going in fresh and, whilst she will take improvement from the run, is pacy and will give them something to catch.”

Aliferous has raced well at all four starts this campaign, but is coming back in distance from her latest close second to Night’s Watch in the Group 3 Neville Sellwood Stakes (2000m) at Rosehill on March 29.

“Aliferous has been freshened, but is drawn awkwardly,” Lees said. “She will finish off strongly, and this should set her up nicely for the Gosford Gold Cup (2000m) at Randwick on May 9. Lees is no stranger to Gosford Cup success, having already won the race twice with Oriental Lady in 2015 and Singing in 2018.

RELYING ON THE 'BOSS'

Brad Widdup is banking on the “Boss magic” clinching him a belated autumn black type victory at Rosehill Gardens on Saturday.

Not only is he hoping to celebrate a Group breakthrough in Sydney this autumn, but also end a frustrating sequence of second placings, including Icebath’s luckless run in the Listed South Pacific Classic (1400m) at Royal Randwick on April 11 on Day 2 of The Championships.

Widdup has had five seconds – Adelong the latest at Canterbury two days ago – in the last fortnight and three of them have been in town.

Proven big race specialist Boss has been called up to get the job done tomorrow, and Widdup has given the daughter of dual Doncaster Mile winner Sacred Falls his tick of approval on the eve of the Guineas.

“I’ve always been confident Icebath could measure up in black type company; that’s why I ran her in a couple of Group races 12 months ago as a two-year-old,” he said this morning. “It was very disappointing to see her get beaten the other day.

“She has had a good preparation and has trained on well since the Randwick race. I’m really happy with her, but almost certainly this will be her last run this preparation.

“There are some excellent races next season for four-year-old mares, and I’m certain there is further improvement in her.”

Icebath has raced only once at Rosehill, when down the track behind subsequent Golden Slipper winner Kiamichi in the Group 3 Magic Night Stakes (1200m) in March last year on very heavy ground.

“Whenever possible, you’re always trying to get black type with fillies, and she was going well at the time. But we stopped with her after that run on the heavy track.”

Widdup has done a splendid job with Icebath, who required an operation when it was discovered she had chips in both front fetlocks after finishing second at Wyong last July at the end of her two-year-old season.

Shazee Lee (Jay Ford) was the last Hawkesbury filly to win the Guineas in 2017. She was prepared then by Scott Singleton, who has since relocated to Scone.

Whilst Widdup’s focus naturally will be on Rosehill, he also is hoping to clinch a breakthrough with Liam’s The Boss at tomorrow’s Gosford meeting.

The three-year-old also was an acceptor for the Bathurst TAB fixture, but a wide barrier made the decision easy for his trainer to head to Gosford with the gelding, whom Mitchell Bell will ride in the Maiden Plate (1900m).

Liam’s The Boss has been runner-up on three occasions, and also ran well in Melbourne last spring when fourth to Pancho (current South Australian Derby favorite Russian Camelot was second) in a Listed 1800m event for three-year-olds at Flemington.

Another training partnership, Hall of Famer John Hawkes and sons Michael and Wayne, cleaned up at the 2014 stand-alone fixture, winning the Guineas with Chautauqua and Gold Cup with Leebaz.

And the team is hoping for a repeat tomorrow with Spend (James McDonald) in the Guineas and pre-post favorite Amangiri (Tommy Berry) in the Group 3 Chalkers Accountants Hawkesbury Gold Cup (1500m). Team Hawkes also won the 2018 Cup with Kingsguard, ridden by Brenton Avdulla.