Jockey Koby Jennings was watching a fishing show when James Cummings called him earlier in the week to ride Colette in the $7.5m Iron Jack Golden Eagle (1500m).

Having nosed out a gallant Icebath in a thrilling finish, the 25-year-old landed the biggest catch of his career. 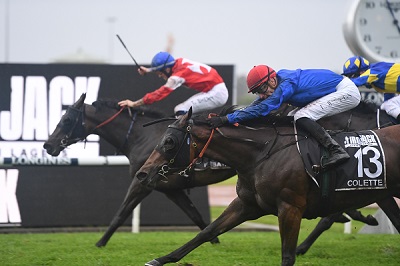 Collett getting her nose down in time to beat Icebath (Pic: Steve Hart)

“I rang him during the week and I had to laugh. He was so relaxed I asked him was he fishing? He said 'no I’m not but as a matter of fact I’m watching a fishing show,” said Cummings.

“I knew I had a pretty relaxed customer on this horse.”

Keeping Colette fresh and targeting Colette, an Oaks winner, at the four-year-old 1500m feature was a Godolphin masterstroke and Jennings was full of praise for the royal blues.

“Thanks to James Cummings and all the Godolphin team for putting me on a beautiful little mare like this. She is the hardest trying horse I’ve ever sat on. I’m lost for words. I’m glad to get the job done,” said Jennings.

“If you told me to look at the photo I couldn’t do it. Everybody looked at me and said ‘I think you’ve won’. I don’t really know how to put it all in.

“We discussed a couple of different scenarios. That was one of them. I let the horse outside me go to get clear air. Some horses weren’t going to take me into the race as much as I wanted to. I let her do her own thing.” 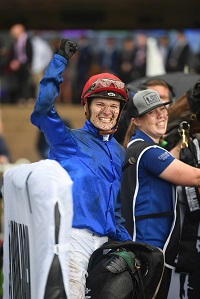 Punters Intelligence reveals that Colette’s 400-200m split of 11.60s won her the race. Icebath, strung up in the field, clocked 11.90s. Take nothing away from the winner, however.

“She is a super mare,” gushed Cummings.

“What a wonderful performance from her to be kept fresh. We had a plan for this spring carnival. We wanted to keep the speed in her legs. She freshened up beautifully since the Epsom.

“Anyone with a pencil in their hand can work out it was too short. She ended up finding a way on the heavy track. We got the solidly run race we hoped for.

“I just said (to Koby) let the race unfold from the half mile like it was mile and a half race and she will eat up the ground late. He kept his head and she savaged the line. She looked like Hallowed Crown there in the last 100m.

“I tell you something this farm has just the most amazing record. This crop of horses now have been reared to win the Golden Gift, the Golden Slipper, the Golden Rose and now the grand slam of the Golden Eagle.”

It wasn’t to be for stablemates Criaderas, blowing his chances at the start with a slow getaway to finish eighth while Flit ran 10th.

“I’m sure Criaderas’ day will come and Flit would have loved to have been a bit further back from the draw. We just managed to get Collett absolutely spot on for the day.”

Collette’s designated charity was Team Tye, with a $410,000 donation heading the foundation’s way.

Check out the results and replays for Golden Eagle Day at Rosehill.