James Keen To Do His Civic Duty On Deploy

The Deploy which contested the 2017 Everest is in the past but jockey James Innes Jnr is confident the 2019 version is going well enough to win Saturday’s Listed $150,000 Civic Stakes (1350m) at Rosehill. 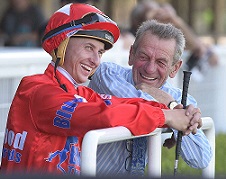 It’s easy to judge a horse on its past glories, or be blinded by them when doing the form, and Deploy is an interesting case.

The Gerald Ryan-trained six-year-old hasn’t won since his track record in the Group 2 Theo Marks Stakes in September 2017, he ran ninth in the inaugural Everest, but missed most of 2018 through needing bone chips removed.

Innes Jnr said Deploy has bounced through his Stradbroke failure and is confident if he can reproduce his first-up third behind Trekking and Brave Song at Scone last month he will take plenty of catching.

“I don’t ride him all the time but I galloped him the other day and I did most of his gallops before Scone. To me he felt as good as he always has,’’ he said.

“You work with the horse you have at present and Gerald is doing that. He’s a good horseman and knows where they are at.

“He’s a straightforward worker but he worked the other day with Albumin and they did a nice piece of work together.

“Back in Listed company, he’s drawn a nice gate and likes a heavy track and if we can get a glimpse of the Deploy we know is there it’s a suitable race.’’

Deploy’s big form pointer for the Civic Stakes is the Luskin Star from Scone and Innes Jnr said it was an enormous performance, one that had him concerned could flatten the horse for his second-up run.

That may be what happened because he wasn’t the same horse in the Stradbroke.

Punter’s Intelligence sectional data from the Scone race shows the gelding ran his first 500m in 29.82 as he and outsider Fuel opened up a big margin – Fuel dropped out to run second last and Deploy was swamped late by Trekking and Brave Song, with Redouble running into fourth.

“He ran some pretty quick sectionals but sort of maintained it, he might have weakened a little bit late because of fitness and the run he had because I didn’t want to go that hard,’’ Innes Jnr said.

“Having a 150/1 pop breathing down our neck all the way had him fired up.

“If he can land in front and can dictate a bit better he will take a bit of running down.’’

TAB has Deploy rated an $8 chance in a wide open Civic Stakes market.

For the 24-year-old jockey another win on Deploy would mean a great deal – he’s had five rides on the horse for three wins and two stakes placings.

“I’m happy to be getting the opportunity to throw a leg back over him because I love the horse,’’ he said.

“He did a lot for me when I was struggling to get rides in town, I won three in a row and ran second in a stakes race all through my apprenticeship.’’

Of his other rides at Rosehill Innes Jnr said if Sweet Ava (race 3) handles the heavy ground she’s capable of giving a sight and is upbeat about No Escape (race 9) coming off a plucky fourth behind Quackerjack on a heavy track.