Hyeronimus Keen To Raise The Bar Again In Oaks

There’s a pattern jockey Adam Hyeronimus has noticed about emerging filly Shout The Bar that has him quietly confident the pair can combine for another Group 1 win at Randwick on Saturday. 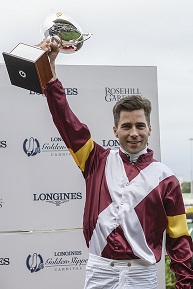 Shout The Bar handed the 29-year-old hoop his first major when they claimed the Vinery Stud Stakes two weeks ago and, according to Hyeronimus, she’s bounced through the win with honours.

“She’s definitely taken me by surprise,’’ he said.

“With every run she has the more impressed I am, and it’s more after the race with how well she comes through those runs.

“She seems to be getting stronger which is a good thing.’’

Hyeronimus has been on board the Gai Waterhouse and Adrian Bott trained filly in all four career starts and she’s risen to every challenge presented to her.

She scored two wins at 1150m then jumped straight to Group company at a mile before stepping up again to the 2000m of the Vinery, no easy task for a horse on one preparation.

“She didn’t have a very tough run in (the Vinery), I had my own way the majority of the race and she’s only run home the last half a mile and it hasn’t fazed her at all,’’ he said.

“She’s impressed me with how she has strengthened up after each run and she is going to be a very good horse next preparation.’’

Shout The Bar is out to emulate Verry Elleegant last year and complete the Vinery-Oaks double and she’s $4.40 with TAB behind Adrian Knox winner Colette ($3) and Probabeel, who chased Shout The Bar home at Rosehill, at $4.

Interestingly, it’s the latter that concerns Hyeronimus the most and he sees no reason why his filly shouldn’t be the one with the target on its back.

“They aren’t going to be gung-ho about pressing their horses early to be in a position so I think that works in my favour.

“However it plays out I imagine getting a good run, she’s a horse that looks after herself very well.

“It doesn’t matter where she is in the run, she’s very relaxed and that will give her every chance to run out 2400m.”

Colette's trainer James Cummings is confident his filly has come through the Adrian Knox win last weekend in style but is wary that she faces a tougher task.

The last Adrian Knox winner to back up and claim the Oaks was Royal Descent in 2013.

“She’s a stayer with a turn of foot which is a rare commodity, she has a mammoth task ahead of her and we’ll just have to see if she can mount the challenge that is required,'' he said.

“But she comes into it looking as well as she did before the Adrian Knox.”

“And there were so many things to like about her win in that race.”

Shout The Bar wins the Vinery Stud Stakes at Rosehill

Hyeronimus has Group 1 rides for Bjorn Baker on Positive Peace in the Coolmore Legacy (1600m) and for Matthew Williams on Gailo Chop in the Longines Queen Elizabeth Stakes (2000m).

Away from Shout The Bar, though, it’s another Waterhouse-Bott three-year-old he’s keen to partner and that’s Dawn Passage in the Group 2 $500,000 Arrowfield Sprint (1200m).

It’ll be the first time he’s partnered the colt, a last start eye-catching second in the Darby Munro three weeks ago, on race day but his eagerness comes from a few spins on the training tracks.

“I’ve had a bit to do with him this preparation, he ran enormous first-up and he’s a very good chance,’’ he said.

“He’s definitely ready to go, I galloped him Tuesday morning and the work was great. I imagine things could work out well for us the way the race will pan out if we can get on the back of the right horse.”

Dawn Passage clocked 34.26 (Punter's Intelligence) for his last 600m when resuming, the fastest of the Darby Munro, is an $11 chance with TAB in the Arrowfield Sprint.