The TAB Highway series continues to provide uplifting anecdotes and opportunities for newcomers - would you believe Woop Woop once existed as Coffs Harbour’s Sally Taylor won the quaint Cup and once worked in her hometown phone shop to subsidise a small team.

Sally 27, who rides her own trackwork and came through pony clubs and show jumping as a kid with a passion, has form outsider Qadira Star ($26 on TAB) in a TAB $75,000 1000m, Class 2 flyer at Royal Randwick on Saturday.

Qadira Star is coming off a speedy Taree Class 2, 1000m win in smart time, the second success for the lightly raced Star Witness four-year-old mare. She also has the services of an in-form Rachel King. 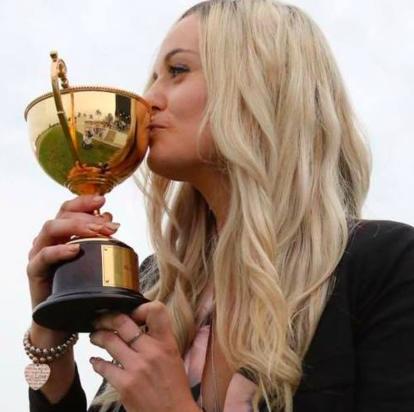 Sally’s circumstances are the pure essence intended by Racing NSW through the Highway series. She is devoted to her small team, mostly cast-offs trained at the local track and the pristine nearby beach.

In a spectacular first training season in 2016 while still working part-time, Sally won the Listed-Grafton Cup with ex-Victorian Rednav besting some Sydney trainers and the region’s strongest stables.

There didn’t seem to be enough hours in the day for Sally. She rode dawn trackwork and then headed off to the phone shop and then after work returned to the stables.

No stable staff, just one special and devoted young lady. These days Sally’s partner is accomplished Coffs trainer Brett Dodson. They have an opinion of lightly raced Qadira Star.

“She has a nice turn of natural speed, progressive mare, has her quirks though and to keep her happy I’ve got to give her variety in her work,” Sally enthused.

“She loves working and having a splash at the beach. We’d prefer a bit of give in the ground on Saturday but she handles most conditions and she’s a race fit mare in form.

“We’ve drawn the inside gate so she is capable of leading, but these 1000m Highways always have so much pressure. We’ll be just as comfortable with a sit.  But looking forward to a big raceday."

Sally has gradually built up a team to enable her to eventually hang up on the phone shop job: “I’ve mostly got eight to ten in work now and that’s enough to cope with and make a go of full-time training.”

Sally is in high anticipation of her target, and also in a supporting role for another tremendous day of Group racing at headquarters. Qadira Star with 56kg doesn’t figure in any tipping panels but she’s a progressive speedster in winning form and a weight drop from her Taree form.

Sally started as a schoolgirl trackwork ride for her father Bryan Taylor who trained a small team. Eventually, Sally moved to Victoria working for the Sheila Laxton and John Symons stables.

She returned home as a training partner with her dad. Their long-time client, owner and friend Peter Wood, also the proprietor of the Coffs phone shop, employed Sally until she went into training full-time. Sally took out a licence with several horses owned by Wood.

2016 was a spectacular debut season for Sally. Rednav won the Grafton feature and also won a strong race at Doomben.

Then Sally trained eight winners and a 24% winning strike rate and 32% placings was incredible for a first season young trainer. Success has been encouraging enough for Sally to increase her stables and clients.

By the way, Woop Woop, the Aussie version of Timbuktu, did exist way back in 1925 in the outback south of WA. Woop Woop was an old sawmill at remote Wilga that eventually closed and faded into outback history.

Royal Randwick is currently a Soft 7 under overcast skies.