Every trainer wants to have a headline horse, that gifted animal who can capture the imagination of punters and, sometimes, the wider public and Greg Hickman is no different. 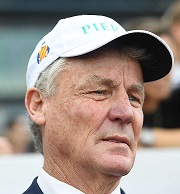 The retirement of his headliner Pierata earlier this year has the Warwick Farm trainer on the lookout for that potential star and he’s intrigued by what level unbeaten three-year-old Travest can reach.

In conversation about Travest’s attempt to make it three from three in the Newhaven Park Handicap (1300m) at Randwick on Saturday, Hickman allowed himself to dream out loud a little.

“We’re always looking for that next horse we can put up in lights,’’ Hickman said.

“This has nothing to do with him but when we had Black Caviar I thought we’d never see another one and then Winx comes along.

“Our racing needs a good horse along the way, something to read about and talk about. I had half of one (Pierata) so at least I’ve had that.

“Who knows how good (Travest) could be, but he has still got to do it. If he does then we could have a nice horse on our hands.’’

Back to the task at hand and Hickman said Travest is still not the type of horse he can get overconfident about when it comes to his work at home.

He’s still a bit of a big kid but you wouldn’t know it looking at the horse who steamed down the outside, easily accounting for Darleb, on a heavy at Warwick Farm first-up and won as he liked.

His last 200m there was nearly two lengths superior to his rivals, 12.01 (Punter’s Intelligence), and it earned him top spot in TAB markets at $3 for his next test.

“I’m still guarded about him, I’m probably not going to get too good an idea how he’s going until he grows up,’’ he said.

“His work hasn’t changed, he doesn’t seem to work super, he’ll play around with his food but he looks well and looks happy.

“I think we have a natural horse that is just doing it on sheer ability. The main thing is to look after him, keep his confidence up and ticking over.”

On the theme of thinking out loud, Hickman said there’s so many options for Travest especially if he does remain unbeaten after Saturday.

They range from just a standard, go through the grades, winter campaign and save him for the autumn to thinking about aiming at the Silver Eagle as a route to force his way into the $7.5m Golden Eagle in the spring.

“I know he has only raced against three-year-olds but any horse that can win two in a row you know you have half a nice horse,’’ he said.

“In the back of the mind are those good races, we might want to space his races so we could go to a Golden Eagle.

“If we can tick him over and get him through the winter he might have the spring in the paddock and look at something in the autumn.’’

He said Rari ($5) will improve on his first-up fifth behind Outback Diva ($26) at Rosehill three weeks ago and warned against dismissing Top Striker after a wide run at the same meeting.

“Tommy (Berry) said Rari got to a good position too easy and he should have rolled a stride or two forward outside the leader,’’ he said.

“He likes racing a bit that way. He’s a Class 1 horse but this is probably a nice race for him.

“Top Striker likes Randwick and the sting out of the ground, what we’ve done with him this week has been good and don’t be surprised if he improves.’’