Addeybb’s trainer William Haggas is preferring to err on the conservative side ahead of the most anticipated race in Sydney since Winx’s farewell at Rosehill on Saturday. 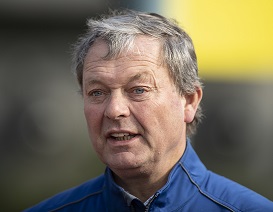 It is, of course, the return clash of the UK superstar and Australia’s best horse Verry Elleegant in the Group 1 $700,000 Ranvet Stakes (2000m) with the score sitting at 2-0 in Addeybb's favour.

Haggas describes Addeybb as ‘every bit as good’ in 2021 as he was last year when he made his impressive Australian debut, and fended Verry Elleegant off, in the Ranvet before demolishing the Queen Elizabeth field.

But he also said, even though he’ll strike his preferred wet surface, the seven-year-old is at a disadvantage in his first run since October and was a little taken aback when told Addeybb was favourite ($1.85 on Wednesday) in the Ranvet.

“I appreciate that we are visitors,’’ Haggas said.

“I’ve been watching Verry Elleegant closely all year and she’s a pretty smart filly. He’s come half way across the world and she’s come down the road.

“If we win it would be great for us, but we’re not confident about anything.

So Haggas said, as it was last year, the Ranvet is Addeybb’s lead up run to the $4m Longines Queen Elizabeth Stakes (2000m) at Randwick on April 10.

He had his final piece of work at Canterbury on Tuesday, sitting off and running down stablemate Favorite Moon, and the trainer declared ‘their work is done’ for Saturday.

“He needed that bit of work but he is pretty well where we want him to be for a first run,’’ he said.

“If you look back to last year he improved from his first to his second run and he will do that again but he goes well fresh.”

Since we last saw Addeybb he’s only had three starts – from the moment he left Sydney last year Haggas has been planning the return trip – and emerged as the world’s best horse in training after he beat a class field in the Group 1 Champion Stakes (2004m) at Ascot in October.

“He found his feet in Australia and came back and went to another level in England. He’s a pretty good horse, we’ve looked after him since he was young and I think he is repaying us now.

“They don’t come along very often this type of horse. Usually they have a complication like they need to be held up or they have to lead but he can do anything.”

That’s an important point to note if, as it is likely, the Ranvet becomes a battle of tactics.

Last year’s Ranvet was a real two horse war as Addeybb led and Verry Elleegant sat second and applied pressure a long way out while he stalked the speed in the Queen Elizabeth.

“I don’t think he has to lead but he doesn’t need to be held up, that’s the beauty of him,’’ Haggas said.

“Tom (Marquand) knows him backwards, he just needs a nice gallop and if he has to make it himself he’s happy doing that.”

Haggas is also chasing back-to-back wins in the Manion Cup after Young Rascal downed Mugatoo in the 2020 edition and Favorite Moon, a much less experienced galloper, was hand picked to make the trip with Addeybb this year.

“He was nice and happy and moved really well.”

Jockey @KPMcEvoy was impressed with Favorite Moon in his gallop with Addeybb on Tuesday, he runs in Saturday’s Manion Cup at @rosehillgardens. He also discusses Wild Ruler in the G1 Galaxy. @tabcomau @7horseracing @HaggasRacing pic.twitter.com/YoHqBNxtw9

“I thought this year we’d bring a younger horse who is likely to improve. He likes a bit of cut in the ground,’’ he said.

“He’s not bad, he’s not as seasoned as Young Rascal was but he has six kilos less.’’

The four-year-old has won twice at around 2800m and both wins have come at Haydock, he hasn’t raced since a failure at York in October but Haggas warns not to pay too much attention to that.

He’s found Kerrin McEvoy to ride on Saturday at 53kg, McEvoy partnered him in his gallop with Addeybb on Tuesday, and is Sydney Cup bound if he can measure up.

“He put up two very good performances last year at Haydock and he ran two very moderate races at York, which is my favourite racetrack, so he doesn’t appear to like York,’’ Haggas said.

“He’s in really good shape, he’s probably come on more for the training than I anticipated.

“I’m putting some cheek pieces (winkers) on him which he’s never had because I need him to be as good as he can be to get into other races.”