Apprentice Jenny Duggan has travelled across the state to chase her goal of taking out the Rising Star series for this season and she’ll achieve it win, lose or draw at Randwick on Monday.

It’s not often you can head into a final with victory assured but Duggan is still keen to make a bird of it by punching home Watchdog, in her first ever ride for Godolphin, in the Racing NSW Rising Star Series Final (1400m).

Duggan won five heats in the series, which kicked off in September, at Port Macquarie, Cessnock, Scone, Queanbeyan and Grafton and says it’s opened plenty of doors for her. 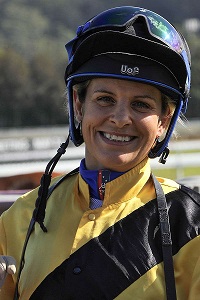 “The series is spread out across New South Wales so everyone does get a chance,’’ Duggan said.

“The initiative that Racing NSW does with this gets apprentices out there and introduces them to new trainers and it definitely has for me, I’ve gone to places I wouldn’t have gone before.

“My manager, who is also my husband, set us a goal for me to win it so he sent me all over the countryside and it has paid off. I think it is a great achievement.’’

Of course Duggan, who has also been a very successful picnic rider, spent over four years away from racing until being re-licensed as an apprentice in early 2018 .

She had a knee reconstruction and decided to take the time to have children.

With 57 points, Duggan is well clear of leading Sydney apprentice Robbie Dolan on 38 and she will join the likes of Jean Van Overmeire, Andrew Adkins, Sam Clipperton and Jay Ford on the honour roll.

She’s rapt to be competing in the Godolphin blue in the Final and believes she’s on a horse that is capable of winning and capping off the series for her.

The four-year-old has been in the finish in all three starts this preparation, a first-up third behind Kolding was followed by a close second to High Shine at Scone then last start beaten a length at Warwick Farm when stepping up to a mile.

“A lot of the form stacks up around him and I feel he is going to be a horse that will put himself into the race,’’ Duggan said.

“He’ll finish off strongly just looking at him, he seems like a bit of a bulldog who will tough it out.

“If there’s one thing this series has achieved for me it’s to get a ride for Godolphin. So I’m chuffed.’’

Watchdog was a $5.50 chance with TAB on Sunday afternoon.

The next target on Duggan’s mind is to outride her city claim, she currently claims 2kg, and will seek an extension of 12 months of her apprenticeship to achieve that.

All the fields, form and replays for Monday’s Kensington meeting at Randwick