Well bred colt Garrison will be out to make up for lost time, and prove himself worthy of getting back in sync with the established three-year-olds, when he re-emerges after a nine month break at Rosehill on Wednesday. 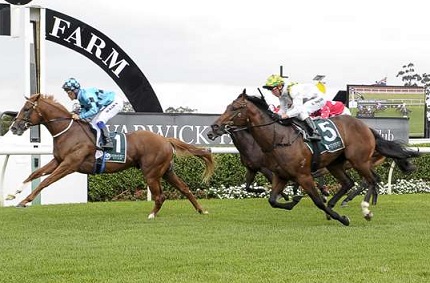 Co-trainer Peter Snowden said Garrison needs to get some runs on the board in the Bowermans Office Furniture Handicap (1100m) having missed the stallion making two-year-old autumn and three-year-old spring with a soft tissue injury.

So far the colt has been seen just once, for a closing second at Warwick Farm in March, and Snowden said he has the talent but lacks experience.

“(The injury) came at a bad time after his first start so we didn’t get to teach him a lot about it so he’s still very new,’’ he said.

“It cost him a bit being a colt, you like to see them have a few runs and be back now looking at carnival type races.

“If you’re going to make a colt into a stallion two and three is when you have to put your hand up. So it doesn’t give him a lot of time now.’’

Garrison, by I Am Invincible, settled midfield at his debut over 1000m and hit the line running his last 600m in 34.08 and easily the best last 200m of 11.64 (Punter’s Intelligence) as he chased home Cardiff.

Snowden said the colt has strengthened up with a bit of time, a small blessing in disguise given the lucrative races he’s missed.

“He’s a nice horse, I don’t mind him, his first run was very good and if he can reproduce that he’s in at a good time of year,’’ Snowden said.

“You know after two or three runs whether they are going to be what they need to be. If not we will keep punching on and get what we can with him.’’

Garrison opened $6 with TAB for his return and Snowden said he improved into his second trial after being ridden upside down and over racing in his first.

“His first trial he raced a bit keen and wanted to pull, the second trial we tried to hold him up and he settled pretty good and he finished off without much pressure put on him,’’ he said.

“I think it’s the better way to ride him, hopefully he settles and it will give him his best chance to run well.’’

Meanwhile, the Snowden stable has already produced several promising two-year-olds this season and two more youngsters are stepping out at Wyong on Thursday in the $200,000 Magic Millions Classic (1100m) in Strike and Remorseless.

Of course they're headed by Dame Giselle and Blaze A Trail, first and third in the $1m Golden Gift, while Sancy kicked off with a winn on debut last Saturday.

Strike was an all the way winner on debut at Eagle Farm on October 12 while Remorseless was a beaten favourite in running sixth at the same track a week earlier.

“Strike won his only run pretty easily and he trialled well the other day. He is a go forward horse and it will suit Wyong,’’ Snowden said.

“Remorseless didn’t run that well in Brisbane but since he’s come back he has put on 40kg which is very good, he’s better for it and is a stronger horse.’’

And Snowden said two-time Everest winner Redzel is back in work, looking well, and will resume in the Group 1 Lightning Stakes in February.

All the fields, form and replays for Wednesday's Rosehill meeting