Gallop Has McEvoy Warming To D'bai Raiding All Aged

A quick spin around Canterbury was enough for jockey Kerrin McEvoy to be convinced Godolphin visitor D'bai is a live contender in Saturday's Group 1 $600,000 Schweppes All Aged Stakes (1400m) at Randwick. 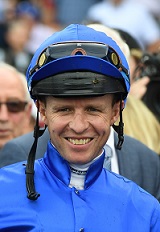 The last of four internationals to race during Sydney's Autumn carnival this year galloped 1200m on Wednesday morning with McEvoy only getting a little serious over the last 400m.

D'bai (pronounced D'bay by his handlers) is one of the favourites, $5.50 second elect with TAB behind local Godolphin galloper Osborne Bulls, for the All-Aged and McEvoy can see why.

"He's a fresh horse on the scene, coming off a nice win in a Group 2 race in Dubai where he travelled really well behind a good speed and quickened up past them over the concluding stages,'' he said.

"I think he is going to act really well over 1400m around Randwick.

"It is a good line up of locals but I think he is bringing nice form lines from good quality events over there.''

D'bai won the Group 2 Al Fahidi Fort (1400m) at Meydan back in January and has only been to Group 1 level twice over sprint trips – a sixth behind Merchant Navy in the Diamond Jubilee (1200m) at Royal Ascot last year and sixth in the Maurice De Gheest (1300m) at Deauville in August.

As for the trackwork itself, McEvoy said the five-year-old is pretty fit so was only galloping at about 80 per cent in his final work out.

He's a nuggety, solid, type and the champion jockey is confident he's sharp enough to give himself every chance of toppling a solid field of Group 1 sprinters.

"He was pleasing, he was well in himself and he travelled around in good order,'' he said.

"He was a little keen and took a bit of settling but he rounded his work off nicely, he stretched up the last 400m and he feels bright and happy.''

Stablemate Dubhe was a beaten favourite in the Sydney Cup last weekend after stepping away slowly and not mustering any early speed.

Aside from being a sprinter-miler, D'bai strikes McEvoy as a very different horse, and one with a much better action, and a good chance of handing trainer Charlie Appleby his second Sydney Group 1 success after Polarisation's 2017 Sydney Cup.

"There's no reason why he can't be very hard to beat, he has the right tools to be able to compete against our horses.

"I'd be surprised if he's not fighting out the finish.''

Among his other rides at Randwick on Saturday, McEvoy is keen to partner Trekking in the Group 3 $160,000 TAB Hall Mark Stakes (1200m).

The James Cummings-trained Godolphin galloper ran a creditable fourth first-up in the Maurice McCarten on a heavy track at Rosehill a month ago but will be much better suited by firmer conditions this weekend.

"A drying surface is going to really suit him it's what he's been needing,'' McEvoy said.

"James has been patient with him to wait for that track, he had a nice tick over trial and he's been ready to go for a little while.

"He's at least three lengths better on top of the ground so I'd expect a really bold showing.''