Enduring drought, fires and flood before COVID-19 restrictions, regional racing has been revived with unprecedented prizemoney. 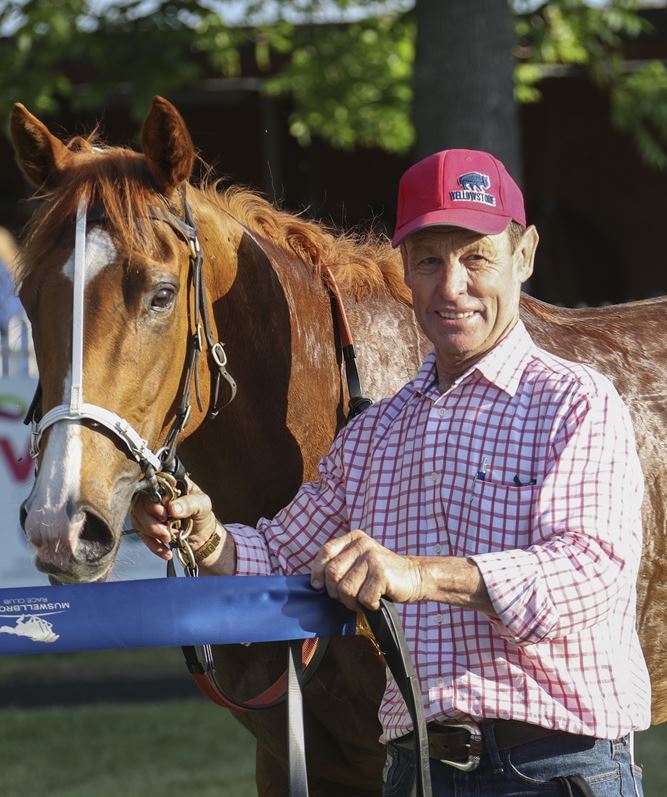 Peter Mills with his bonny mare Dreaming For More. Image by Bradley Photographers

Mills is another inspirational battler with an opportunity on the big stage.

A bush knockabout with a lasting hope of finding a fast one, Mills at 62 years is still riding roughshod, pre-training frequent rogues.

And at headquarters finally has his first series runner in Dreaming For More ($15 into $14 on TAB).

On a small property on the edge of Quirindi, Peter mostly pre-trains but he’s had a licence since 1986.

He trains Dreaming For More and one companion, a maiden gelding Hillbilly.

Through pre-training, modest sheep sales and winning the odd race, Peter makes a living. His lean periods have been frequent enough.

Peter didn’t manage a winner last season. Dreaming for More has provided him both successes this season.

His best result is easily winning successive Tamworth Cups in 2007/08 with Greg Ryan and Gold Buckle, the first horse in 50 years to do so.

With Peter’s background, Dreaming For More, a Waterhouse and Bott discard after issues, is aptly named into a $75,000, 1100m Class 3.

A bargain buy, the Dream Ahead (US) five-year-old mare was banished to the sales after just a maiden win, numerous failures and nine months off with problems.

She has revived enough with recent Armidale and Muswellbrook wins for a “crack in town” according to Peter. She’s weighted on 57.5kg less the 2kg claim for Chris Williams.

Mills had intended claiming with regular rider, apprentice Reece Jones, but he was suspended.

“She’s a beautiful mare, had throat surgery for wind issues and a long time off - they rarely come back 100 percent so she’s done a mighty job to win those races,” Peter enthused.

“Like a lot of them from the bigger stables, she was sold when she wasn’t up to city grade and had issues. But the breeding was there and she came here so well educated.

"They always are from those stables. The previous owners might have had enough and the new syndicate got her for around ten grand.

“But she’d have been an expensive yearling I reckon. She’s paid her way and hopefully more to come.

“With her pedigree, she’s a breeding proposition and that’s how an old mate and I started out. I ride her most of her work. At my age, I wouldn’t do it if she was a handful but she’s a lovely natured mare, she’s really happy up here and racing like it.”

And at five years she’s lightly raced with the admirable record of three wins and eight placings from just 13 starts. And despite issues, an early Kembla maiden win, a Kensington placing and her recent successes, her form is encouraging enough into a restricted country race.

“The thing is if we’d stayed at the regionals as a Class 3 after those wins, she’d have been weighted around the 61kg or 62kg. And racing for a lot less prizemoney.

“In harder grade, it's important we claimed. Look, she gets a decent weight drop she’s race fit and mares hold their form; it was worth the trip while she’s eligible for a Highway.”

Peter’s cheer squad will be loud enough back home and if his mare achieves what price assessors and punters don’t expect, it will be as good a Christmas as it gets on the Quirindi farm.