If unbeaten three-year-old Sir Elton wraps up his first preparation with his record intact at Randwick on Saturday his trainer Adam Duggan will have some decisions to make. 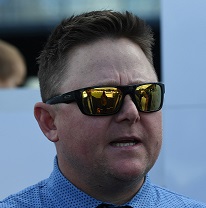 The logical target for Sir Elton would be next year's Provincial Championships but Duggan is not short on confidence in the promising sprinter and wants to get him in sync with the carnival horses sooner rather than later.

That could result in a short summer campaign where one of a few Listed sprint features could provide a stepping stone class and timing wise.

Of course, Sir Elton has to make it four from four in the Book Spring Hospitality Handicap (1200m) first.

“We're all aware it's winter, if there are seasons now,’’ Duggan said.

“Ten or 15 years ago you wouldn't get carried away with winter form but I suppose you have to believe what you see sometimes.

“We're going to the paddock when the spring horses are starting to race so, if we're going to be competing with better horses, we'll have to have a short break to fit back in with them if that's the horse he is going to be.’’

One race Duggan would like to win with Sir Elton is the Listed Takeover Target Stakes (1200m) on his home track but with the Gosford Cup moving from January to a stand alone meeting in May that race’s positioning is still unclear.

And the Provincial Championships is a tricky one for Duggan because you need to have a Class 5 or under horse and Sir Elton would have to be put on ice until the Gosford Qualifier in March.

“If he gets the job done he's a four win horse and he can only win five,’’ he said.

“It's a possibility but I don't know how the timing will go.’’

Sir Elton gained the tick of approval from champion jockey Hugh Bowman, in his comeback ride two weeks ago, who gave Duggan some interesting insight into the horse.

The gelding ran his first 300m in 18.56 (Punter's Intelligence) as he made a failed attempt to cross Embracer for the lead but had more than enough in the tank to run out an easy winner.

“He said he has a bright future, the thing that caught him was his good temperament for an inexperienced horse,’’ Duggan said.

“He didn't feel he was a wet tracker and would be better on top of the ground.

“He did it tough in the first half the other day on a very heavy track and was still too good late.

“If he doesn't have to go out as hard on a better track I think that will help him run the 1200m out, even though we've never had a query about it anyway.’’

It took a few days for what Sir Elton had achieved last start to sink in with Duggan, it was his first Randwick winner and carried quite a weight of expectation.

Sir Elton is again expected to win, he’s $1.90 favourite with TAB, despite the presence of a promising filly in Haut Brion Her among his opposition.

“I've had a bit more time to think about it now and it's quite exciting,’’ he said.

“It was a relief with the expectation of him going straight from the provincials to a Saturday race. My initial feeling was relief, then followed by what could be in the future.

“I'm looking forward to racing against a filly like her, we could be a run in front of her this preparation and she has had a funny prep. I've got to say I'm pretty happy with the preparation my bloke has had.’’