Elleegant The Key To Another Waller 'White' Wash 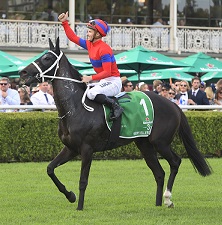 Verry Elleegant beat just one horse home in the Winx Stakes last month at her first start since the Oaks and Waller’s racing manager Charlie Duckworth said there were excuses first-up and plenty of work has gone into her in the past four weeks.

“I thought her first-up run on face value was a little bit plain but the track bias that day didn’t help and they all ran home in a solid time,’’ he said.

“We weren’t prepared to panic, when you think her last run last campaign was 2400m and her first-up run is 1000m shorter, outside of horses like Winx, it was always going to be difficult.

The four-year-old has posted five of her six career wins on rain affected ground including a Group 1 Vinery Stud Stakes on a heavy track, and is unbeaten second-up.

Duckworth said the stable has made some changes to Verry Elleegant’s work to educate her and strengthen her up mentally ahead of Saturday’s Group 1.

“One of those things is dressage, to help her become a bit more rounded, as well as working her in company,’’ he said.

“We used to work her on her own so she would relax but we’ve done some work in company with other horses so she learns to relax beside other horses and between horses.’’

One of the eye-catchers from the Group 2 Chelmsford Stakes (1600m) two weeks ago was Youngstar who charged from the back to run seventh in easily the fastest last 600m of the race (33.19, Punter’s Intelligence).

Some consideration was given to running the mare in the Kingston Town over the 2000m but Duckworth said the mile on a wet track suits her better and is confident she can win a good race this spring.

“The 2000m race would have been an easier race in terms of quality but it would probably be tougher on her physically,’’ he said.

“She is going to get better deeper into the preparation so we thought flattening her in a Group 3 isn’t worth it because she’s already a Group 1 winner.

“There’s plenty of races for her. I think we have her to her very best and that’s part of the reason why we don’t want to run her over 2000m on a heavy track.’’

Youngstar is $31 with TAB while stablemate Life Less Ordinary is one of the rank outsiders at $61, Duckworth said this race will determine whether his path this spring after a handy first-up effort in the Tramway (1400m).

The eight-year-old won his only start on a heavy track, in the Hollindale Stakes, and was Group 1 placed in the Doomben Cup so he’s no slouch but he still faces a task.

“Obviously he is a bit out of his grade but his wet track form is good and we’ve kept him nice and sharp,’’ he said.

“He does have a nom for the Epsom where he gets in with a reasonable weight (54.5kg), there might be the option of going there or stepping him up but Saturday will tell us a bit more.’’