To be the best you need to learn from the best and that’s why Newcastle trainer Nathan Doyle invested more than four years picking the brains of some of racing’s smartest minds. 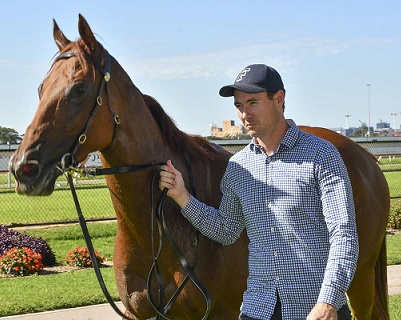 It might seem as though Doyle, 32, has just burst onto the scene in the past year or so but it isn’t obvious that he took out his licence at 21 and trained out of his home town Muswellbrook for a few years.

Racehorse training was Doyle’s dream, his ambition, and he enjoyed some success but it pales in comparison to the results of the current season where the dividends of his investment in learning are there for all to see.

As he chases his first city win with promising mare Café Royal at Rosehill on Saturday, Doyle said his time with Peter and Paul Snowden and Mark Newnham gave him the confidence to back himself when he re-entered the training ranks in the second half of 2018.

“I thought the time was right to go out on my own and we haven’t looked back,’’ he said.

“I don’t second guess myself. I’m happy with the decisions we make, when you take a horse to the races you know they’ve done everything you can do to get them to win the race.

“There is a reason why (trainers like the Snowdens and Newnham) are good at their job. Sometimes you didn’t even have to ask questions, you just need to watch the way they are around a horse and how they do things.

“I used to question whether I’d done things right but there’s none of that this time. They are either good enough or they aren’t, you just need a bit of luck on your side.’’

Doyle’s emphasis on placement is evident in how he’s waited until now to produce Café Royal in town in the Alabama Express @ Yulong Handicap (1400m) after making it four from five with a first-up win at Newcastle on June 6.

It should be five from five and the circumstances around why have been well documented and Doyle said he wishes Koby Jennings could have ridden the filly on Saturday but due to the coronavirus protocols he has to remain riding out of town.

“We wanted to put her on the right foot and like most things with sportspeople winning becomes a habit. She has a will to win and gritted teeth,’’ he said.

“They are confidence animals, they’re like us, when you get them winning and in the right frame of mind they can get to levels you wouldn’t expect them to get to.

“I like to take her through her grades, and I think she is still six months away as well. She’s doing it on raw ability at the moment, once the penny really drops I think she will be a nice filly.’’

Café Royal’s first-up win was a narrow one but Doyle explained she hit the front far too early and that will to win was there to see as she held off the challenge from Trophies Galore.

The three-year-old was a $6 chance with TAB on Thursday and the only negative from Doyle’s perspective is the track condition as he’s adamant she’s good enough.

It’s also worth noting that he had planned to send her to Brisbane for some stakes races but the protocols around human travel, and the fact she’s a little high maintenance at the moment, put that on the backburner.

“She has a habit of floating when she hits the front too early, the other day she had the leader cold on straightening and once the other horse went up and past her she fought back well,’’ he said.

“She’s derived plenty of improvement from that as well. I think she will be better when she gets to 1400m and a mile so it looks an ideal stepping stone.

“She’s definitely good enough on a firm surface, on a shifty wet track that’d be the only question mark to me. I have no doubt she is up to them, she will tough it out and be right there in the finish.’’

He expects Luga Lad, chasing a hat trick, to be competitive and he’s excited to see what two-year-old filly Muscadelle can produce on debut.

“A couple of good rides have got Luga Lad home. We’ve found the way to ride him, you have to leave him alone for the first couple of furlongs and he will attack the line late,’’ he said.

“It’s a step up in grade but he is fit and well.

“I quite like Muscadelle, she’s not overly big but she has that will to want to be a racehorse. She loves charging around of a morning.

“She’ll be somewhere in the money and I thought she’d be my better chance of the two.’’