It’s fair to say Through The Cracks has crept up a bit on trainer Angela Davies so she’s not going into Saturday’s Group 3 $160,000 Fujitsu General Festival Stakes (1500m) at Rosehill thinking he can't overcome what is a tough ask. 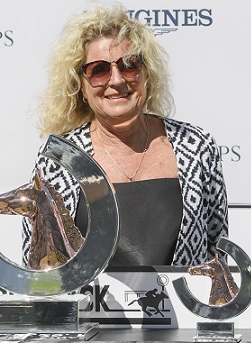 To be frank Davies would prefer the race to be at Randwick, where the gelding won the Provincial Championships Final earlier this year, or at least have drawn a single digit marble.

But she's taking a very sporting attitude into the race knowing Through The Cracks hasn’t hit his class ceiling yet.

“If he overcomes Rosehill with his pattern of racing, and that gate, and gets back and is able to rattle home and win I’ll be really sitting up and taking notice,’’ Davies said.

“Unfortunately barrier 14 hasn’t done us any favours. I probably wanted to at least a pair closer than he was the other day so it is forcing our hand to go back again.

“That it is pattern of racing but as the distances start creeping up you’d want to hope that he can get that little bit closer.

“Ideally I’d want to be midfield especially at Rosehill. It’s different at Randwick.”

Through The Cracks will be the popular Gosford trainer’s first runner at Group level and the horse has certainly earned his way there.

He’s won seven of his 15 starts and only missed a place three times but it wasn’t until he won the $500,000 Provincial final in April that Davies realised he could scale greater heights.

“The way he hit the line at Randwick that day, against the toughest competition he’s met, I thought he might keep going,’’ she said.

“I’ve had some lovely horses and have thought they may have been better than him but they haven’t got there. I take a very reserved stance now.

“They have to get there and prove it. It’s a really tough gig this game, you wake up a lot of days and there’s more kicks in the teeth than joys.”

TAB certainly rates Through The Cracks as one of the main chances in the Festival, he was on the second line of betting at $6 on Thursday.

The gelding is coming off an impressive win over 1300m at Newcastle on TAB Hunter day where he ran faster overall time than the feature race, which stands him in good stead for the class rise as a few of his rivals were beaten in the $1m event.

Robbie Dolan takes the ride on Saturday and the horse drops 6kg on his Newcastle win.

Through The Cracks wins at Newcastle on November 14

The Festival is a stepping stone to the Group 2 Villiers Stakes (1600m) at Randwick on December 12 and Davies would like to head in that direction if he can rise above the challenges ahead of him.

“It’s hard to compare but it’s still fairly impressive that he was able to run that time at Newcastle. It keeps giving you confidence that he’s a horse that can reel those sectionals off.”