What now for Alizee? That was the burning question after the hulking mare made a winning return in the $200,000 Smithfield RSL G2 Missile Stakes (1200m) at Rosehill Gardens. 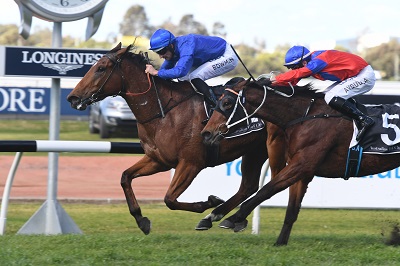 “We have a few options, we could wait for as long for a race like the Sheraco (September 14), but the Winx (Stakes) is there in a couple of weeks and she’ll have had the run under her belt,” pondered Cummings.

“That’s worthwhile considering but the critical thing will be how she pulls up after, what looked to be on face value a tough run, sweeping out wide.”

Alizee didn’t do her chances of claiming Godolphin’s place in The TAB Everest but Cummings revealed that choosing the right candidate comes down to more than ability.

“If she is in for her best preparation she certainly gives it a shake, whether she is the one, 600kg of horse power, that we choose for The Everest…,” he said.

“One thing that would come into our thinking is whether she would handle the atmosphere of The Everest as easily as another horse. Osborne Bulls has been there and absorbed the atmosphere before, being such a high pressure event.

“The thing about Alizee though, the more pressure in the race the better she’ll go. She has won another weight for age race today and has built up an incredible portfolio for a wonderful mare that we are happy to be training again this season.” 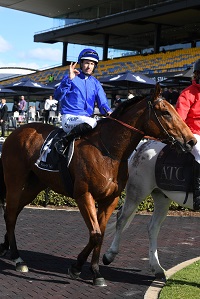 Punters Intelligence reveals that the early section (first 600m) of the Missile Stakes was run in a leisurely 36.59s, about five lengths off what would be considered an average clip.

The margin was only narrow in the end with Invincible Gem closing in late, but the result was never in doubt. What made Cummings most nervous was how well he had Alizee in the lead in.

“I was nervous for the horse because this is as well as I’ve ever prepared a horse for a big race, ever, and you just worry what might go wrong,” Cummings revealed.

Alizee, having paraded with a winter coat, has plenty of improvement to come according to Hugh Bowman with the five-year-old peaking on her sustained run.

“It was a ridiculously slow pace and she had to overcome that which was what made it such a good win, the last thing I wanted to do was to be going around the field and hit the front at the 400m but I just tried to help her through it as best I could,” said Bowman.

“She responded as I knew she would, she was feeling the pinch late but it was a great return and when you see her in a race with more pressure you’ll see the best of her.”

So would she be deserving of a spot in the $14m feature come October?

“I would have thought so,” Bowman replied without a second’s though.