After winning the battle to turn Rover into a racehorse, trainer Anthony Cummings is confident the four-year-old can start a move through the grades at Randwick on Thursday. 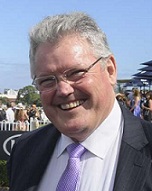 It will be exactly one month since the gelding had his first and only trial, and two weeks since his debut win, when he contests the Sepoy @ Darley Handicap (1300m).

Cummings said the son of Fastnet Rock has been a slow maturer and efforts to keep him as a colt slowed down his progress.

“I thought he would make a late two-year-old and certainly a three-year-old but it didn’t happen,’’ Cummings said.

“He was never ready, we tried to keep him intact and it slowed us down.

“He got more victories out of that than we did. He was gelded and we got on with the job.’’

Hugh Bowman takes over for injured apprentice Jean Van Overmeire on Thursday and Cummings said Rover has only improved since his impressive career kick off over 1100m at Rosehill.

He showed tactical speed to land fourth on the fence in the run but was outsprinted early in the straight as the runner-up Tawaret came from behind him to hit the lead.

But Rover rallied in the closing stages where he ran the fastest last 200m of 11.23 (Punter’s Intelligence) and edged clear late.

“He went into that race and made a few mistakes and still managed to win,’’ he said.

“I’d expect him to show that improvement (from racing), I think the step to 1300m will suit him as he was beaten for speed over the short course but was still strong to the line.

“It would be illogical for him not to handle the class on what he did first-up.’’

Something Fast, another progressive galloper from the Cummings yard, is due to wrap up his preparation at Randwick on Saturday.

The five-year-old will tackle a Benchmark 88 race over 1600m, with Brenton Avdulla booked to ride, a race he’d need to win to warrant the lofty target Cummings has in mind.

“He just needs a normal week and he will run,’’ he said.

“Then he’ll have a break and be back to aim at the Doncaster.’’

Rover wins on debut at Rosehill on December 11

Meanwhile, Cummings said his stable stars Libertini, Prince Fawaz and Mizzy are in varying stages of their preparation for the autumn.

Prince Fawaz, a Group 1 winner last season, didn’t come up in the spring and Cummings pulled the pin after he ran last in the Golden Rose.

“He’s started to do some fast work and he’s looking great, he’ll be ready for the Hobartville,’’ he said.

Exciting filly Libertini is set to resume in the Lightning Stakes in February while Golden Eagle placegetter Mizzy returns to the stable this week.

“She’s done really well in a short space and ideally we’d like to have her ready for a Coolmore,’’ Cummings said of Mizzy.

All the fields, form and replays for Thursday's meeting at Royal Randwick