First use of the track and no Dreamforce breathing down his neck gives trainer Jason Coyle some confidence in You Make Me Smile bouncing back at Rosehill on Saturday. 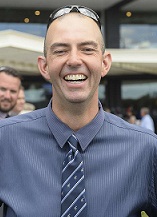 Since being gelded, You Make Me Smile has made a quick dash from midweek company to starting favourite in the Group 3 Liverpool City Cup (1300m) two weeks ago and Coyle puts the last start defeat down to firing up with Dreamforce keeping him busy.

To his credit, the four-year-old boxed on to be beaten only three lengths.

“It was the first time in his last four runs he’s brought himself undone by being a bit keen in the run,’’ Coyle said.

“It looks good on paper, at his three previous starts he was able to take up a position where he was relaxed but to Dreamforce’s credit he got him over racing a touch.

“That was the difference between being strong to the line and a little bit soft the last furlong.’’

When it comes to the Catanach’s Handicap (1350m) on Saturday, You Make Me Smile appears ideally placed in the soft to heavy conditions and with a barrier draw that allows him to work across rather than being punched up from an inside alley.

That scenario saw the gelding firm from $7 into $5.50 by Friday morning with TAB.

“He gets a soft track so he looks fairly well placed,’’ Coyle said.

“He still has a few chinks in the armour but his class got him through the grades quickly and to a level of racing we anticipated he should be at.

“He likes to get his toe in and being in the first race is always an advantage on the wet tracks.’’

There’s a Group 1 up for grabs at Rosehill and despite beating many of her rivals just three weeks ago White Moss is a $34 chance in the $600,000 Coolmore Classic (1500m).

Coyle concedes there’s more pressure on paper in the feature fillies and mares race but the grey is adept in rain affected ground.

“She’s generally a very good trackworker so she’s been working well. I think it is the right form line, all those horses she beat last start are there and a similar performance will have her competitive.’’

Jason Coyle’s comments on his other Rosehill runners:

Memes (race 2, $41): “Sometimes mares just decide time’s up. I think she gets every opportunity to show she wants to be a racehorse. The only thing against her is there looks like some pressure on up front.’’

Mo’s Crown (race 4, $14): “He blew the start and had to work and was left a sitting duck. He should derive good benefit from that. I have no idea on a wet track. They all have to go through it. You can talk about pedigree until the cows come home but I want to see him go around on it first.”

Salsonic (race 8, $35): “I’m unsure about his liking for a rain affected surface. It’s hard to get a guide on his form because he went missing after his Group 2 win. He couldn’t have been more impressive first-up, he seems to be in a good space. I wouldn’t want it to be wetter.''

Fabricator (race 9, $14): He’s been up for a while but we’ve kept him as fresh as we can and I think he deserves his chance on a Saturday in town. He’ll cruise across and put himself where he’s comfortable. If it stays around the soft range he’ll run an honest race like he usually does.’’

All the fields, form and replays for Saturday's Coolmore Classic meeting at Rosehill