Could A Seachange Be Key To Tom Breaking Through?

You have to wonder if there’s anything more champion trainer Chris Waller can do to coax a win out of everyone’s second favorite horse Tom Melbourne.

It can be said for certain he won’t stop trying until the cult figure makes his final appearance but could a change of routine ahead of the eight-year-old’s return in the Listed $150,000 Carrington Stakes (1400m) at Royal Randwick on Saturday be the spark that breaks a 1044 day run of outs?

Waller’s racing manager Charlie Duckworth revealed Tom Melbourne has been pre-trained on the beach in Victoria and instead of a trial he contested a jump out at Flemington on January 11.

“He went to a beach property before coming to us, he was pre-trained on the beach and the dunes and that’s why he started off down there,’’ Duckworth said.

“He’s usually pre-trained in Sydney. It might have freshened him up, he had an arduous campaign last prep.’’

Tom Melbourne won five of his first seven starts but has had 30 attempts since his last win in the 2016 Albury Cup and recorded 11 second placings, two at Group 1 level, hence his reputation as something of a bridesmaid (re-live some of them below).

He’s finished in the first two in six of his eight first-up runs so what rabbit can Waller pull out of his hat in the Carrington?

“Blake Shinn should suit him, he’s the kind of jockey who loves getting them up and travelling on the bridle,’’ Duckworth said.

“Even when they come off it, it looks like he’s holding onto more than what he’s got which might be the way to ride Tom.

“It’s not easy winning Group 1s or any race for that matter and it’s basically a matter of timing with him.

“His work has been very good, he travels as strongly in his work as he does in his races. He wants to work hard. He’d break 23 if you let him every day of the week, he’s that kind of horse.’’

Shinn has ridden Tom Melbourne three times for seconds in the Spring Preview in 2017, when somewhat unlucky, and in the Bill Ritchie and Ajax Stakes.

While popular sentiment will likely be with Tom, Duckworth said Endless Drama appears very well placed on the back of a trial win on January 15.

“He trialled really well, he probably did a little more than we would have liked in the trial,’’ he said.

“He’s dropping back to Listed company and gets the 60.5kg weight but he’d be the biggest horse in the stable so if anything will carry the weight its him.

“He’s drawn well and I think it is his race for the taking.’’

Endless Drama ran third in the Carrington last year with 58.5kg before winning the Apollo Stakes in Winx’s absence. His four subsequent starts were at Group 1 level. 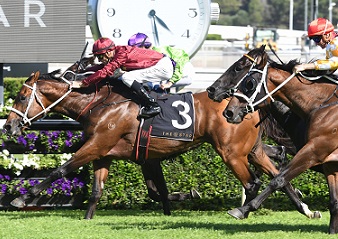 The seven-year-old has had bone chips removed from his near and off-fore fetlocks since his 10th in the Stradbroke in June.

ATC Derby placegetter Tangled missed the spring and while he’ll find the Carrington a bit sharp Duckworth said he’ll be a horse to look out for a bit later in the preparation.

It’s the four-year-old’s first run as gelding on Saturday.

“He’s probably a bit of a forgotten horse, he’s very good on his day, but it is ultimately a starting point for him,’’ Duckworth said.

Meanwhile, among the tribe of Waller runners on Saturday is one of his leading ATC Derby hopes for this year in Dealmaker who resumes on the back of one trial in #Theraces Handicap (1400m).

Dealmaker ($4.60 with TAB) has won one race from seven starts but has already been Group placed and wound up a rushed spring, following a small ‘setback’, with a midfield finish in the Vase (2040m) at Moonee Valley.

“He’s a genuine carnival horse who probably didn’t live up to expectations last preparation but we trhink he is a talented colt,’’ Duckworth said.

“It looks a winnable race, while he might be a little bit soft you could wait a week and give them a trial and then you draw 16 and you scratch your head.

“His work has been nice and sharp, he should get a lovely run and make his luck from there.’’