It’s a triple crown that champion jockey Hugh Bowman says is more for horses than jockeys but in King’s Legacy he’s confident he’s on the right horse to complete the coveted two-year-old treble at Randwick on Saturday. 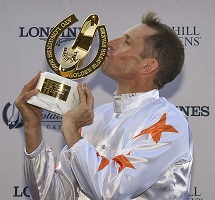 Bowman won the Golden Slipper on Farnan last month and combined with King’s Legacy for an upset Inglis Sires’ win two weeks ago in a performance he says was no fluke.

The Peter and Paul Snowden-trained colt is favourite at $2.60 with TAB to add the Group 1 $400,000 Moet & Chandon Champagne Stakes (1600m) to his record, a race that will be run in completely different circumstances to the Sires’.

“It was run at a frantic speed and it was very testing conditions but I think he can stamp himself as one of the leading two-year-olds of the season,’’ Bowman said.

“I know the stable has had a high opinion of him and he’s a good horse. I think it is a very different race, I don’t think there is the class there was in the Sires but he has a lot of expectation this week whereas the other week he had none.

“He was 20/1 or something, I thought he was a better chance than that but he exceeded my expectation in winning the way he did. He has a great turn of foot, I’m not worried about the drying track.”

Bowman had a spin on King’s Legacy at trackwork on Tuesday and said he wasn’t there to learn anything new and the colt did everything that was expected of him.

It’s been seven years since a horse completed the Sires-Champagne double, that was star filly Guelph in 2013, and Pierro, a year earlier, is the last youngster to complete the triple crown.

No horse is attempting the latter feat in 2020 but Bowman said it would be a nice bit of icing on the carnival if he was able to win the big three.

“It’d be great if it happens, but really the triple crown is there for the horses and not the jockeys.’’

Godolphin colt Bivouac is out for redemption in the Group 1 $480,000 Schweppes All Aged Stakes (1400m) after an incident at the start of the TJ Smith Stakes cost him any chance.

Bowman has an air of confidence about Bivouac saying his run, while disappointed in finish sixth to Nature Strip, was outstanding considering the ground he conceded and doesn’t expect to be needing binoculars to see the leaders this time around.

“Things didn’t work out for us the other day, he jumped and he went up and didn’t get a clean break and that gave us no chance at all,’’ he said.

“All I could do was ride the race, it was disappointing but the horse ran as well as he could run and as well as any horse in the race.

“Though we could take an exception with the winner who has stamped himself as arguably the best sprinter in the world at the moment. He went as well as he could go and showed the turn of foot required to win at this level but he was just too far back.”

“I think we are going to be in a perfect spot and if we can get a bit of luck at the time we require he is probably the horse to beat,’’ he said.

Among Bowman’s other Randwick rides is comeback galloper Kementari, who takes on a couple of quality Godolphin stablemates in Everest placegetter Trekking and Deprive, in the Group 3 $140,000 TAB Hall Mark Stakes (1200m) .

At his first run since being gelded, Kementari ran the day’s fastest last 600m (34.22, Punter's Intelligence) in finishing third in the Star Kingdom Stakes (1200m) on March 28 and Bowman said it’s a masterstroke from trainer James Cummings to play a conservative game for now.

“He has a high profile but he’d had a long time off and I love the fact that James has held him back from that top grade at this stage,’’ Bowman said.

“He could have two or three seasons ahead of him at the top level if we can get him back mentally because we know what he can do physically.

“The way he went would suggest he is on track to coming back and being a significant racehorse. We are still in the woods to a degree but it’s a lovely race for him, a beautiful draw and I am sure he will run well.”

All the fields, form and replays for Saturday's All Aged Stakes meeting at Royal Randwick