Bridge Says It's Time For An Everest Legend To Rise

Les Bridge walks casually across the many training tracks at Randwick, decked out in his South Sydney jacket – which he says he hasn’t taken off for a week – headed for the trainer’s hut to talk about the TAB Everest. 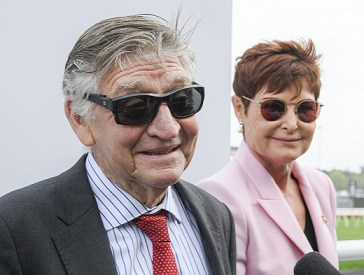 There’s a large part of Bridge that didn’t think he’d be doing this again.

After all, Classique Legend was supposed to be in Hong Kong right now not having a second shot at the $15m TAB Everest (1200m) at Royal Randwick on Saturday. Bridge concedes Hpong Kong is where the exciting grey sprinter will likely be by the end of the year.

There are a few nerves now the big day is so close but Bridge does have one eye on his beloved Bunnies and their clash with Penrith about three hours after the Everest is run and won.

When that game is played the trainer plans to be at a family barbeque, hopefully with an Everest trophy in tow.

“I don’t know what I’m more touchy about, Souths or Classique Legend.

“I said last year I thought it was just a preparation too soon for him so I have no excuses this year, the horse looks absolutely beautiful.”

That second shot at the world’s richest race on turf is important to Bridge.

He’s made some big statements about Classique Legend, who ran a luckless sixth in the 2019 TAB Everest. After he won last month's The Shorts he labelled the horse the best sprinter he’s trained.

It raised eyebrows and for many prompted the question of what about Sir Dapper?

Bridge is not backing away from it but at the same time he says the TAB Everest is the stage the five-year-old needs to own come 4.15pm on Saturday.

“You’ll see on Saturday how good he is. I think he will win. I think he is the best sprinter I’ve ever had and I’ve had some good ones.

“He’s had a great preparation and if he can just get a bit of luck, which you need in these big races, I just think he can win the race.”

Classique Legend, $4.20 with TAB, spent the autumn carnival in limbo waiting for transport to Hong Kong but when that didn’t happen he returned to Bridge and needed to mark some time.

Underdone he won the Listed Bob Charley AO Stakes over 1100m at Randwick in June under 60kg, unimpressively to the eye but it served a purpose.

The fruits of that cameo were seen when he returned to win the Group 2 Shorts (1100m) last month and lost no admirers in defeat when Libertini ran past him in the Group 2 Premiere Stakes (1200m) two weeks ago.

Bridge, after that race, was adamant he’d win the Everest and from barrier six he just wants a clear crack at them and for the horse to have his chance.

Classique Legend runs second in the Premiere Stakes on October 3

“I thought his run in the Shorts was terrific. If he can reproduce that, or get the same run, he is going to be really hard to beat,’’ he said.

“The faster they go the better. Probably he’ll be in the middle of the field or the second half, peel out on the turn and get a clear run. That’s all I want.”

Jockey Kerrin McEvoy knows a thing or two about winning the TAB Everest - he of course claimed the first two on Redzel - and he put the grey through his final paces on Tuesday morning, convinced everything is in order.

Bridge knows he doesn’t need to saddle McEvoy with a plan, he knows the horse and will only receive one instruction from the trainer.

“I’ll just tell him to win. He’s won two so he has to try and make it three now,’’ Bridge said.