After four Group 1 seconds during the Sydney autumn, jockey Tommy Berry feels he’s overdue for a breakthrough at Royal Randwick on Saturday. 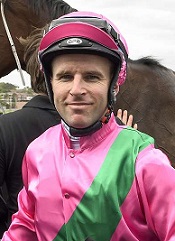 He’ll only get the one chance but he’s confident if Pierata – who to be fair is also overdue – finally gets the breaks he can claim the Group 1 $600,000 Schweppes All Aged Stakes (1400m).

It’s been well documented how valuable that Group 1 is against the name of the entire to trainer Greg Hickman and his owners so Berry knows what’s at stake.

“I’ve had plenty of chances in the past and I’ll have plenty of opportunities in the future but Greg’s chances are limited at times,’’ Berry said.

“He doesn’t get all the good horses that other trainers get but he’s got one here. It changes what this bloke is worth dramatically if he wins a Group 1 and it could change Greg’s life.’’

It’s been just over two years since Berry’s last Sydney Group 1 – Chautauqua’s third TJ in 2017 – and he admits a couple of his close calls this carnival have hurt.

He’s chased home Winx twice, on Brutal in the George Ryder and Kluger in last week’s Queen Elizabeth, was runner-up in the Australian Derby on Madison County and the one that hurts the most was Pierata’s defeat by a pixel in The Galaxy.

Pierata is the $5 second favourite behind Osborne Bulls ($2.50) with TAB in the All Aged and that difference has Berry scratching his head considering there wasn’t a lot between them at the finish of the TJ Smith.

“Take the winner out (Santa Ana Lane) of the last start and he’s been beaten a head,’’ Berry said.

“Osborne Bulls only beat him a head and there probably shouldn’t be that much difference between them.

“I wasn’t overly disappointed with him the other day, he did come off that tough run in the Galaxy and it took a bit more out of him than we anticipated.’’

General discussion around the All Aged Stakes is that it’s a race that will be won by the horse who gets the right run and is in the right place at the right time.

Berry’s view of Pierata in the TJ was the inside gate worked against him.

“The barrier suits him well because, I think, he is better suited outside of horses,’’ he said.

“He wasn’t overly comfortable in the run where he was in the TJ. He needs a nice genuine speed where he can sprint well off the back of it.

“He doesn’t need a lot to go his way, he just needs to keep racing the way he’s racing.’’

Berry is looking forward to partnering Brave Song when he resumes in the Group 3 $160,000 TAB Hall Mark Stakes (1200m) after two trials suggested he’s come back in good order.

Brave Song ($11) has been scratched a couple of times, from Sydney and Melbourne, in recent weeks and the jockey said this race will tell connections plenty about the promising four-year-old.

“We’re not sure how good he is, he’s a lovely type and light on his feet,'' he said.

“He’s a horse that has always shown above average ability. He trialled enormous for me at Randwick but the other day at Rosehill you could tell being on a chopped up track he didn’t like it as much.

“It’s imperative for him that he gets a dry track. The barrier doesn’t concern me because he will get back and there looks genuine speed in the race.’’

On Amangiri in the Group 3 $160,000 Cellarbrations Frank Packer Plate (2000m), Berry says a dry track will suit her despite her ability to handle the wet.

The filly was run down by Aliferous, who then ran fourth in the Australian Oaks, in the Adrian Knox Stakes two weeks ago.

“What she is doing at the moment is on sheer raw ability. Once the penny drops she’s going to be a serious filly.’’