Berry's Expecting A Mother Of A Return

Tommy Berry isn’t so sure he can repeat his quartet of winners from the last Rosehill meeting but he’s excited about the return of a smart filly in Sylvia’s Mother on Saturday.

The three-year-old, last seen running fifth in the Group 2 Light Fingers Stakes in February, has well and truly grown up, according to Berry who is unbeaten in three rides on her.

Berry said Sylvia’s Mother lacked a little in stature back in the summer but has been impressed with what he’s seen and felt in her trial win ahead of the Rosehill Bowling Club Handicap (1100m).

“She’s come in this preparation twice the size she was strength wise, she’s not much taller but has filled out into her body,’’ he said.

“It was an impressive trial and I would say she’s going to the races with a great chance.

“She’s a filly who rarely disappoints you, she always brings her A-game. I did want to see something in her trial to show me she has come back well.

“And she did trial well and has come on since then.’’

Sylvia’s Mother’s presence in June is a curious one and perhaps the Hawkes stable’s plans with her will become clearer if she beats the older horses on Saturday.

Sylvia's Mother wins a trial at Rosehill on June 7

She has an 84 rating already and finished close up in her only attempt in stakes company so there’s a case to be made for her to be a spring player in the mares races – so she may join stablemate Desert Lord for another short stint in the paddock.

That’s speculation at this stage but Berry said as Sylvia’s Mother has gained experience she’s been relaxing more in her work at home and in her races.

“Since she’s started relaxing she’s been finishing off better in races,’’ he said.

“I’ll have her where she is happy, I couldn’t see her being further back than midfield from the alley but it’s about having her happy and switched off to find the line.

“Up against the older horses is never easy, no matter what time of year it is, and she has to step up to show us she is as good as we think she is.’’

The filly was a firm $2 favourite with TAB on Thursday and is one of two Berry rides to head the market, the other being last start winner England ($4).

England, trained by Chris Waller, was one of Berry’s quartet from two weeks ago - the fourth time he’s achieved that feat at a meeting - and he was impressed with the victory coming off a Scone maiden win.

He said he took notice of James McDonald’s comments after that Scone win and put them into practice with great effect so isn’t looking to change a lot in #TheRaces Handicap (1200m).

“He’s taken a while to learn his craft, he won well enough at Scone and James said to the connections he’d be better off ridden more off the pace so we did that the other day,’’ Berry said. 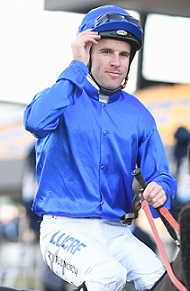 “He’s drawn well again and should get a good run. It’s similar opposition to what he beat last time so he should be in the finish again.’’

Another of Berry’s winning foursome was the Hawkes trained Kapajack but the popular jockey will be out to play villain when he rides Nicochet in the Everest Carnival On Sale Handicap (1300m).

Nicochet had some traffic issues when he finished runner-up to Kapajack first-up from a spell but Punter’s Intelligence sectional data shows he was strong late and was the only horse in the race to break 12 seconds for the last 200m (11.87).

Berry said while it will take a good performance and perfect ride to turn the tables, given they meet on the same weight terms, he’ll be using his knowledge of the favourite to help him.

“I should be able to get on the back of Kapajack and follow him everywhere I want,’’ he said.

“We (Kapajack) probably had a better run in the race last time, even though we were wide with cover, and could put the field away quickly while Kathy (O’Hara on Nicochet) was still making a run through the field.

“Kapajack will take me everywhere I want in the race. He’s still young and very green, when he hit the front the other day he wanted to have a look around while Nicochet is more experienced and he might be able to turn the tables.’’

Among his other six rides Berry pinpointed Hogmanay (Tab.com.au Handicap) as being in a suitable race.