Forget the boom on the horse he’s riding, the fact he’s on a short-priced favourite – there’s a much more personal reason Tommy Berry would love to guide Masked Crusader to victory at Rosehill on Saturday.

The Vale Rick Worthington Handicap (1100m) is not a group race, it doesn’t carry huge prizemoney or status but it’s a tribute to a horseman who affected a wide range of people in the racing industry and a man Berry, and twin brother Nathan, grew up knowing and admiring.

Berry speaks with a great deal of respect for Worthington and trying to win this race is as important to him as any of the Group races he’ll be competing in.

“Rick was a good friend of the family,’’ Berry said.

“He was a great supporter of Nathan and myself, and my father. Dad did a bit of pre-training for him as well when we were apprentices.

“He was a great person and to win would mean a lot for sure.

"Every trainer and every jockey would say the same, I think just about everyone has had an association with him at some point.”

Worthington (pictured below) fought an eight-year battle with cancer, he was just 60 when he passed, and just over six weeks ago spoke publicly about his determination not to let it win.

That spirit comes as no surprise to anyone who knew him.

“I spoke with him a few weeks ago, I was hoping to catch up with him for a bit of lunch but obviously things went bad pretty quick and it was something we didn’t get to do unfortunately,’’ Berry said.

“I think anyone that knew him knew he was tough, he fought a long battle.

“A lot of the time you’d say 'he’d be in a better place' but he’d still rather be here fighting the battle.”

Masked Crusader, the $1.95 favourite with TAB, started his spring campaign with plenty of expectation on him and while beaten by Varda first-up Berry was rapt with the run. 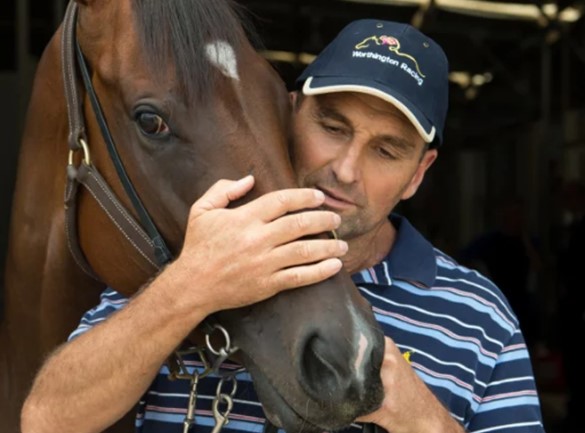 In heavy ground the gelding clocked the meeting’s fastest last 600m of 34.92 and last 200m of 11.83 (Punter's Intelligence) – he was the only horse to break 35 and 12 seconds for those respective sections.

“He was brilliant first-up, he looked big in condition and woolly around the coat,’’ Berry said.

“He was obviously going to take good improvement out of that, and he has done, with a month in between runs.

“This is a new test for him, he has to step up and show he is worthy of going to bigger and better races.”

Berry said he’ll have to assess quickly what tactics he’ll use on Masked Crusader, who was scratched from a race at Randwick last week with a boil in his mouth, and is heading out with an open mind.

It’s easy to forget the horse has only raced five times, for three wins, given the talk around him as a potential TAB Everest runner ($26 in TAB betting), but the fact remains he’s a benchmark 80 horse at this point.

“Everyone has a big opinion of the horse, he just has to turn up and prove it,’’ he said.

“He’s drawn awkwardly, I’m not sure how I’m going to ride him. I’ll probably just ride him how he jumps - if he’s slow away he’ll probably go back, if he jumps well he could go forward.”

“He’s had a bit of bad luck at times, that’s the way it is sometimes but in saying that he got through the (first-up) run unscathed.

“He might end up in the same spot (as last start), Special Reward looks to have the main speed in the race. I might be able to sit outside of him or might even take up the lead if he jumps well enough.

“But the horse is in great order, he’s Group 1 placed so he gets into the race well (with 54kg).”

“He’s a lovely colt and very similar to his brother in many ways.

“He’s a bit of a slow maturer, he feels like he has plenty of ability and a lot of scope for improvement. Whatever he does he won’t disappoint, he could win the race, but he will definitely be a better horse next prep.”

“I’d like to see another bold run. He’ll appreciate a bit of speed in the race, which there will be, he’ll get back and be hitting the line strongly late.

“It’s a very good line up but his run against Anders first-up was massive on a track he didn’t appreciate and carrying 59kg.”