Jockey Tommy Berry sees the return of exciting three-year-old Remarque at Randwick on Saturday as an opportunity for the colt to stamp himself as a potential star of the spring. 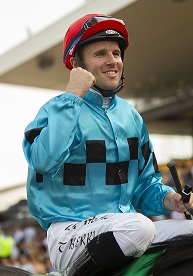 There’s always been an air of expectation around the brother to 2018 Golden Slipper winner Estijaab, even prior to his debut win, and Berry is certainly on the bandwagon.

Due to Covid restrictions Berry hasn’t been on the colt’s back in those trials but said they spoke for themselves.

“What you see is almost as good as feeling for yourself and he’s looked pretty good, hasn’t he,’’ Berry said.

“We’ve always had a high expectation from this bloke because he’s always shown us a lot at home on the track.

“It’s only a stepping stone but he has had the two trials so it shows he’s had a good grounding for the weekend and he’s not there just to go around. He’ll be there to make a statement hopefully and providing he gets the right run I think he will.”

Remarque defeated subsequent Group 3 winner Zethus on debut in January but a setback meant he didn’t reappear until his fifth, beaten two lengths, behind Anamoe in the Group 2 Todman Stakes in March.

Berry said the fact Rosebud, which was used by the Hawkes stable last year as the kick-off point for dual Group 1 winner Ole Kirk, is missing the likes of Anamoe and Stay Inside means the race is the perfect starting point.

“He’s found a race where all the big guns from the autumn are going in different directions so he won’t meet any of them. You’d expect him to go quite close,’’ he said.

“He looks like he’s come back well, he’s a little bigger and stronger – not that he needed to be as he was always a well put together animal.”

Berry said barrier one isn’t the first barrier he’d pick for Remarque but sees enough speed in the race for the colt to land in a stalking spot.

“He probably does appreciate a bit of room but there’s some fast horses in the race,’’ he said.

“He’s just going to be able to park on the back of them and he’ll have his shot.”

A few weeks ago Berry worked his magic on the Chris Waller trained Blondeau and he’s back on another enigmatic stablemate in Hulk in the Little Wings Handicap (1100m).

It’s been a month since the five-year-old’s shock failure on a heavy track but Berry said he’s generally a reliable horse and is rapt to draw inside on Saturday.

“He’s very much like Blondeau, he has a short turn of foot and needs things to go right,’’ he said.

“Barriers are key to him winning races and on the weekend he’s drawn very well in a race where there’s speed and he’s going to get a perfect run.

“When he doesn’t win there’s always a little excuse but punters don’t want to see excuses they want to see winners so hopefully we can get the job done."

While a soft draw is a boost for Hulk, Berry said a wide draw is also a plus for talented mare Eight Diamonds in the Ray Selkrig Handicap (1200m).

An easy first-up winner at Canterbury, Eight Diamonds battled into sixth place behind Vitesee at 1400m three weeks ago but Berry says there’s more in her favour this time.

“I like when this mare draws wide because I can take my time finding a spot on her. There doesn’t look to be a heap of speed in the race so she might find herself a bit closer.”