Trainer Bjorn Baker can tell you plenty of horror stories about the bad luck that has befallen Drachenfels on the track in the past nine months but all will be forgotten if connections can celebrate an overdue win at Rosehill on Saturday. 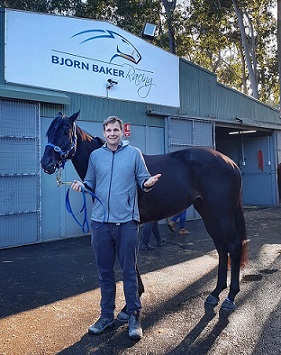 When the former Godolphin galloper was snapped up by Baker in October last year he was certain the five-year-old wouldn’t take too long to break through.

But coming into the TAB Rewards Handicap (1200m) he’s had six starts for Baker and genuine hard luck stories in four of them. So he figures the owners are deserving.

“He’s got a lot of ability, I think he is going really well but I’ve had him almost a year now and he’s had absolutely no luck whatsoever,’’ Baker said.

“We’re due a bit of luck with him for sure. I think once he gets the breaks he has a couple of Saturday wins in him.

“When he wins he’s going to win really well and we’ll wonder why it took him so long.’’

The latest in the gelding’s run of misfortune came second-up, after a similarly luckless resumption, at Rosehill two weeks ago when beaten just over a length by Albumin.

He charged through the pack from last, weaving a passage, but ran into a brick wall that jockey Jason Collett said was mostly the horse’s own doing by refusing to push his way into a closing gap.

Despite that Drachenfels, $9.50 with TAB, ran the fastest last 600m of the race in 33.45 and the best last 200m of 11.22 (Punter's Intelligence) and both Baker and Collett were adamant he should have gone close.

Baker said the extra 100m will be a plus while barrier one’s benefits will be assessed as the day progresses. He does have a query on the heavy track but there are two close third placings on heavy ground from his Godolphin days that say he’ll be fine.

“I guess the big thing is how the track is playing. We’ll put him where he is comfortable and hopefully he can have a clean run at them,’’ he said.

“Possibly he could be a little bit closer. We’ll see how the day is playing.

“He’s rock hard fit, the extra 100m will help him and maybe that can take a bit of luck out of it.’’

Meanwhile, Baker is looking forward to attacking the spring with classy mare Champagne Cuddles and rising four-year-old Green Aeon and he’s keeping the dream alive of tackling the two biggest races in the spring with the pair.

Drachenfels runs an unlucky sixth at Rosehill on June 15

Champagne Cuddles is likely to resume in September with the $14m The TAB Everest the ultimate dream – for which there are currently five slots left – while the lightly raced Green Aeon could earn his way into the $7.5m The Golden Eagle.

“We’ll probably look at a race like the Sheraco Stakes first-up and maybe the Premiere.

“If she runs well there who knows, the Everest is there. On her runs in the TJ Smith and the All Aged Stakes she might warrant a spot in a race like that.’’

Green Aeon won his first two starts before a game fifth in the south Pacific Classic behind Fasika, also Golden Eagle bound, back in April.

“We’ll bring hm up and he should be ready to race in mid to late August,’’ Baker said.

“I’ve got a lot of time for him. (The Golden Eagle) is going to be a tough race, no doubt about it. Who knows, he’s definitely got a lot of ability but he will probably have to win his way there.’’