On-course bookmakers past and present will be honoured this Saturday as the Australian Turf Club hosts its second annual Bookmakers Recognition Day and a return to racing in 2020 at Rosehill Gardens.

Four NSW bookmakers in partnership with the NSW Bookmakers Co-Operative will be featured at a special function for a large group of current and former fielders held before the start of the raceday.

Mark Merlino, Louis “Lou” Cox, Charles John “Jack” Ashman and the recently deceased William “Bill” Waterhouse will also each have a race named in their honour on Saturday.

Mr Merlino, who continues to field on Australian Turf Club metropolitan tracks, this year celebrates 40 years fielding as a bookmaker across NSW racecourses.

In 1999, he became a Director of the NSW Bookmaker’s Co-Op, before rising to the currently held position of Vice Chairman.

Mr Cox, affectionately known as Lou, commenced bookmaking in NSW in 1972 and has worked at 43 different thoroughbred racecourses from Albury in the south, to Broken Hill in the west, Newcastle in the Hunter Valley and Murwillumbah in the northern rivers of NSW.

Jack Ashman began teaching in central NSW in 1957 before moving to Broken Hill High in 1959 to take up the role of Mathematics Master. On his first Saturday in the new town he began working as a bookmaker’s clerk. 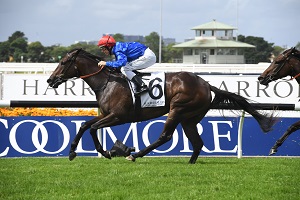 Kiamichi wins the 2019 Golden Slipper, the 2020 edition is just over two months away. (Pic: Steve Hart)

Mr Ashman became a licensed bookmaker in 1987, fielding at Broadmeadow gallops, and after replacing Noel Sweeney on the Board of the Bookmakers Co-Operative Society in 1992, became Secretary of the Co-op Board in October 1993, rising to Vice Chairman in 1996. In 1998 he was voted in as Chairman, a post he held until his resignation from the Board in October 2008.

Renowned former bookmaker Bill Waterhouse, acknowledged as once the biggest racing bookmaker in the world, passed away in late 2019.

Mr Waterhouse began working on race courses as a 16 year old in 1938, initially clerking for his father, and after a period working as a barrister, he took up a full time bookmaker’s license in 1954.

In 1967, he became the first Australian bookmaker to field at Royal Ascot as part of a two year stint operating in the UK.

With great publicity surrounding his ongoing betting duels with a number of huge punters, Bill Waterhouse became a leviathan bookmaker – holding more than the Tote on the Melbourne Cup in 1967 – leading him to be widely regarded as the biggest gambler in the world and the “king of the bookies”.

Bill Waterhouse retired from fielding on Australian Turf Club tracks in 2010 but continued working in his grandson’s off course bookmaking company before it was sold in 2013.

“I thank ATC Wagering Manager Sean Thompson and the NSW Bookmakers Cooperative for working together to host this second Bookmaker Recognition Day as we thank and honour bookmakers for their part in the colour and atmosphere of racedays and their contribution to the NSW racing industry.”

“We are glad for the opportunity presented to recognise not only those members from the metropolitan region but also from wider NSW.

“Over the past 12 months the Australian Turf Club and Co-Op have worked hand in hand to offer new products and services to punters, keeping the on-course wagering experience vibrant and exciting.

“We look forward to continuing this partnership and thank the Australian Turf Club for hosting the day, with congratulations going to those who have been recognised.’’

For all ticketing, racing and general information including details on best price early ticketing for the upcoming Sydney Autumn Racing Carnival visit theraces.com.au

He’s won an Italian Derby - a million dollar race - and Goldstream, the Italian bred gelding who won his ...
Read More

Racing NSW has been informed of the passing of Mr Ron 'GoGo' Fitzimmons at Mater Hospital in Newcastle following a ...
Read More