Kris Lees opted to run the seven-year-old in the $250,000 feature ‘mile’ – the winner automatically becomes exempt from a Group 1 Doncaster Mile ballot over the same course in April – rather than the Benchmark 88 Handicap (1600m), where he would have carried 59.5kg after Sam Weatherley’s claim.

The stable has drawn a comparison with Sense Of Occasion’s $31 Villiers victory two years ago to rate Articus as a chance of repeating the feat, after rain arrived in Sydney overnight. Sense Of Occasion came from well back to land the Villiers on a soft track after much longer odds were bet. 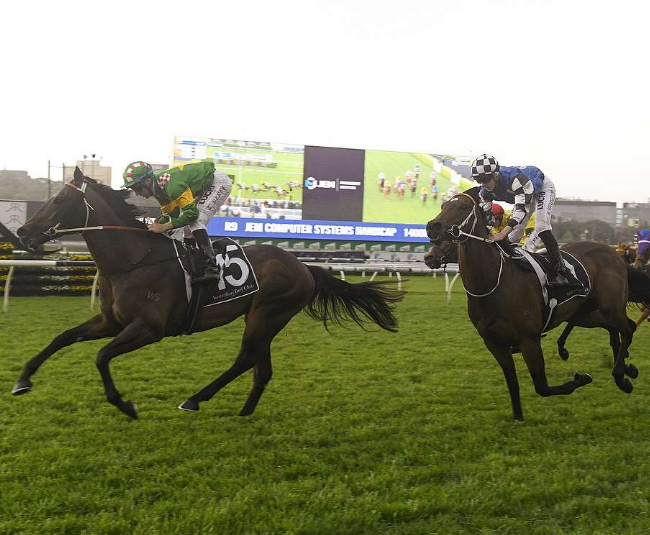 “His form had tapered off when he came to Kris and, after winning the Premiers Cup (1900m) at Rosehill in August and then finishing fifth in The Metropolitan and fourth in City Tatts Cup (both 2400m), freshened him to win the Villiers two months later with a lead-up trial at Gosford,” stable spokesman Lucas Miller said.

“Articus came to us from Victoria in autumn last year midway through a campaign and Kris turned him out after three unplaced runs.

“He spelled really well, put on condition and has turned his form around with two excellent performances this time. He has an inside draw, only 53kg with Andrew Gibbons to ride and is a real knockout chance after the rain."

Articus has won on both soft and heavy ground, and resumed with a $101 second to Mahalangur on a Soft 7 in a Benchmark 88 Handicap (1400m) at Royal Randwick on October 20 with 59kg. He then ran third from an awkward draw to Interlocuter and Fabrizio in the Goulburn Cup (1600m) on November 25 on much firmer ground (Good 3).

“Star Reflection’s last start defeat (ninth at Rosehill on November 24) was inconclusive,” Miller said. “The rain will definitely enhance her chances. Kool Vinnie has been an unlucky horse and deserved his latest Rosehill win. He probably should have won four of his last 10 starts.

“His last 1400m run was in the Provincial Championships Final at this track in April when he finished seventh and that was one of his unlucky performances. He has drawn the inside and hopefully there will be pace on to enable him to produce his strong finish.”

“James was keen to stick with Only Wanna Sing, who should have been in the finish when only eighth at Canterbury last time,” Miller said. “He has drawn poorly, but can definitely figure if the breaks go his way.

“Zip A Dee Doo Dah is in good form and after winning the Kempsey Cup (1450m) hit the line strongly in a Saturday race when third to Organza in a Benchmark 78 (1500m) at Rosehill on November 24.

“The form is good as runner-up Reflectivity won there last Saturday after overcoming a slow start. Provided Zip A Dee Doo Dah can have some luck from a wide draw, he is going well enough to make his presence felt.”

Zip A Dee Doo Dah did all his earlier racing in Singapore and joined Lees’ stable after a lengthy break. He was having only his third local start when he caught the eye at Rosehill. Dolan’s 3kg claim was necessary to offset High Power’s allotted 63kg in the Benchmark 70.

“Robbie is riding really well, and was narrowly beaten on Turnberry for us at Rosehill last Saturday,” Miller said. “High Power ran a terrific race in the Spring Provincial Series Final (1600m) at Kembla Grange when he finished third after being pushed off the track on the home turn. He keeps improving and should get a nice run from a favourable alley.”