'Rocket' Ready To Blast Off In Saturday's Randwick TAB Highway

If the original TAB Highway plans for ACT flyer Affinity Beyond had to be put on extended delay, Luke Pepper’s mare has restored the confidence with a clock alert-winning treble into a $75,000 Class 3, 1000m support event to the historic Group 2-$250,000 The Agency Villiers Stakes Raceday at Royal Randwick on Saturday.

Amidst injury, behaviour issues resulting in a 10-month spell, the Starspangled speedster was explosive winning by a total of near nine lengths in near class record times for an early Canberra maiden and resuming with a Wagga Wagga winning double again unextended. 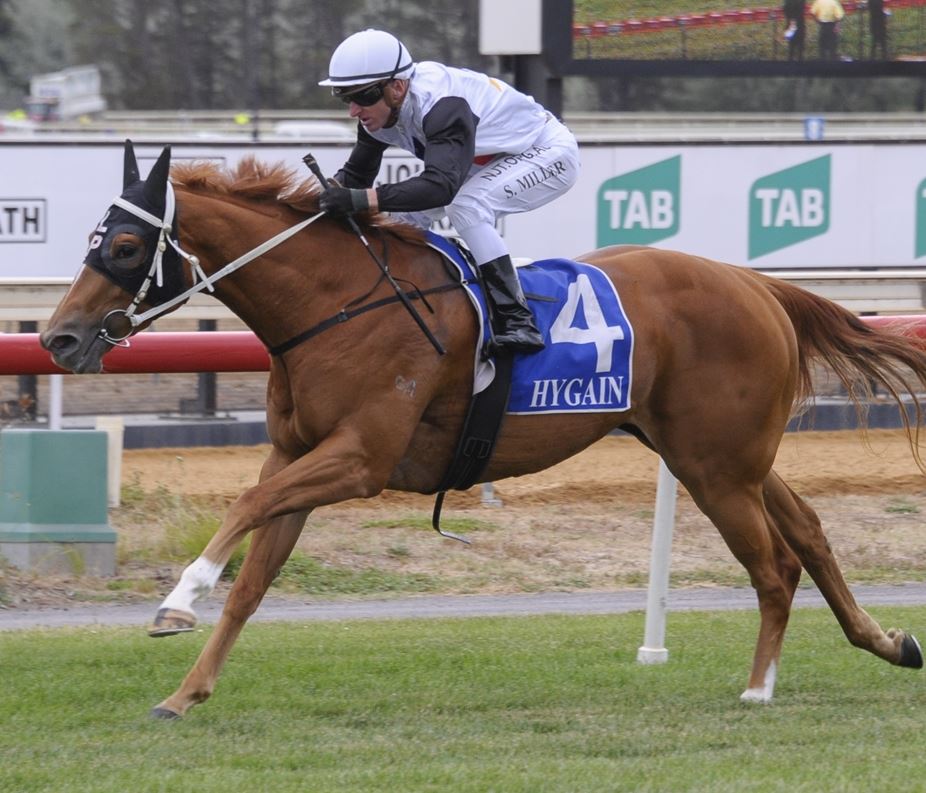 Affinity Beyond (Simon Miller) bolts in at Canberra. Image by Bradley Photographers

Now over to Pepper: “We’d planned for the Highways way back on what she was showing us, but at three she had some recurring knee issues, immature and a handful, so we turned her out,” Pepper explained as Affinity Beyond carries 57kg for regular rider Simon Miller into a short course dash.

“She’s always shown exceptional ability even before she won a maiden by ‘five’ and ran time. But we took the vet's advice and spelled to let her recuperate and mature.

“She’s come back just super-flying. The way she’s been winning and running time, we were confident she was up for a crack in town.

"She’s figured it all out, and for that level of prizemoney while she’s still eligible. It’s taken a long while to figure it all out but she’s right where we want her to be for Saturday.

“We’re looking forward to the day. It’s going to be exciting to see how far she might take us.”

Pepper, a south coast Cups specialist and original Highway winner, has been successful on occasional trips to Sydney with select gallopers.

From a young ACT trackwork rider and international travelling companion for the mighty Takeover Target, Pepper has built a substantial team in Canberra since relocating from Moruya almost a decade ago. And recent seasons have been his most productive.

Affinity Beyond has rarely been led and with three wins from seven starts, all ridden by Miller, another regional success would have made her ineligible for Highways. Of course, worth treble the prizemoney compared to regional restricted races.

And if Affinity Beyond can progress and sustain her speed beyond 1000m, the Country Championships are on the agenda for Pepper and his syndicate.

Meanwhile, unprecedented series nominations from regional stables for the traditional day, and Villiers history - extending back to 1892 including iconic winner Bernborough - has resulted in successive Highway races. The other episode is a tribute to retiring Pat Webster.

Affinity Beyond is $5 second favourite on TAB (in from $6) behind Tejori ($4.20) trained by ACT neighbour and mate Nick Olive. From barrier eight Affinity Beyond he drops a little in weight after resuming from an extended spell to win that Riverina double.

“She’s a natural speed mare, invariably she jumps and runs. That’s our intentions but if we strike something fast enough to burn her off, then we’ll be happy to sit in the first few.

“We’ll leave that to Simon. He understands the mare, been on her for all her wins so we’re sticking with the winning formula.”

The Webster tribute episode sees Pinnacle Prince rising in grade from a maiden win, a pronounced $2.70 favourite (in from $3.60) on the strength of his early TAB Highway second to subsequent The Kosciuszko winner, Cavanough stablemate It’s Me.