It promises to be a great day for the Irish at Rosehill Gardens on Saturday, launched by the regular TAB $75,000 Class 3 Highway and escalating spectacularly for the $7.5 million Iron Jack The Golden Eagle and $1 million Yes Yes Yes Stakes.

In-demand Emerald Isle apprentices Tom Sherry, with the momentum of a double on Wednesday and 95 wins last season, Louise Day who was also successful at the Kensington Track and Robbie Dolan’s extended impact has resulted in near full books starting with the Highway. 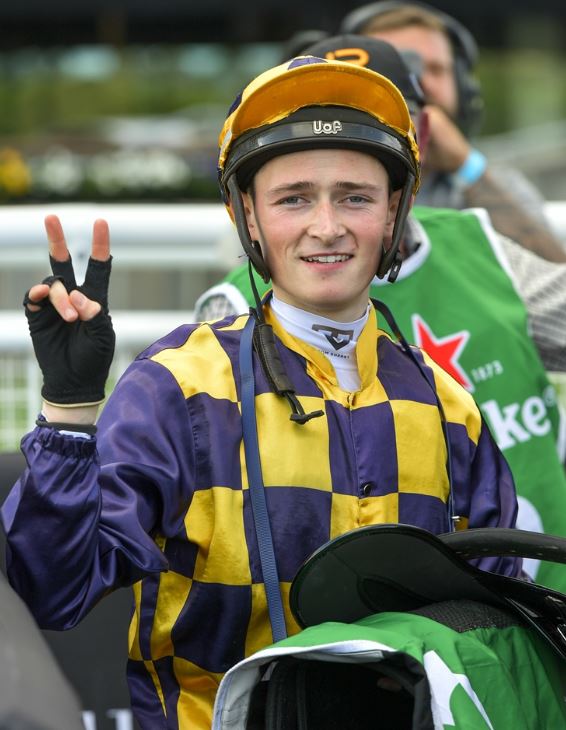 Tom Sherry after winning aboard Time Raid on the Kensington Track yesterday. Image by Bradley Photographers

Heavy form is a prerequisite as the Irish contingent dominate markets on a 1200m episode.

Dolan has ridden Crackneck ($9) for successive series placings, the strongest possible push a second to eventual The Kosciuszko winner It’s Me last month.

And then third behind Depth That Varies in the recent episode won by Air Marshal. Fancy an Irish quinella or trifecta? The form is compelling.

And it’s a special occasion for Wayne Wilkes and his son Joel 29: “It’s his first runner in our training partnership - Joel is back home after working with Godolphin, we’re looking forward to a great raceday,” Wayne enthused.

“Joel’s a horseman - rides all our work and we’ve got a decent opinion of this mare. She puts in every time - lightly raced with the upside.

“She’s progressed and right where we want her to be on Saturday. The worst side of heavy is always a concern but she has handled rain-affected tracks.

“Louise understands this mare, ridden her from the start and won on her twice. Likely from where we've drawn we’ll have to go back but we know she’ll close strong. ”

The four-year-old will thrive over the extra distance and was dominant previously at Scone. Following the restricted country race, it’s quality and quantity for the Irish.

For the numbers of Highway owners and trainers, aside from their personal aspirations, they’ll relish the opportunity, amidst current restrictions, to be trackside for superlative feature races.

Depth That Varies, transferred to the former jockey and champion rodeo rider after the gelding’s training newcomer Nicholas Dixon was suspended, is another advantaged by the extra distance and a far more favourable inside draw.

Luke and elder brother Cody have risen spectacularly into the training ranks with adjoining properties at Tamworth amidst the education of their life-long racing parents Glenn and Mary.

Luke’s 61-career successes in a short span is an exceptional 22% winning strike rate from 17 winners last season and the momentum of three more into the new season. And the brothers have already competed in Country Championships with Moobi third to Listed sprinter Noble Boy in the Muswellbrook Wild Card last season.

Another leading contender is the former Waterhouse and Bott-trained Cock Match ($14) in its second preparation for Danny Williams at Goulburn. The gelding has city benchmark form and first-up and wet track credentials.

At present Rosehill Gardens is rated a heavy 8 but plenty of rain is forecast on Friday.