The first season trainer was near breathless, speaking from the saddle after riding work, intriguingly on an early French Longchamps winner Obelos (GB) - a racing world away into a Royal Randwick 1600m, country $75,000 TAB Highway on Saturday.

The ambitions of young James Ponsonby are all-consuming and he’s no intimidated newcomer on the big stage of Group racing at headquarters. 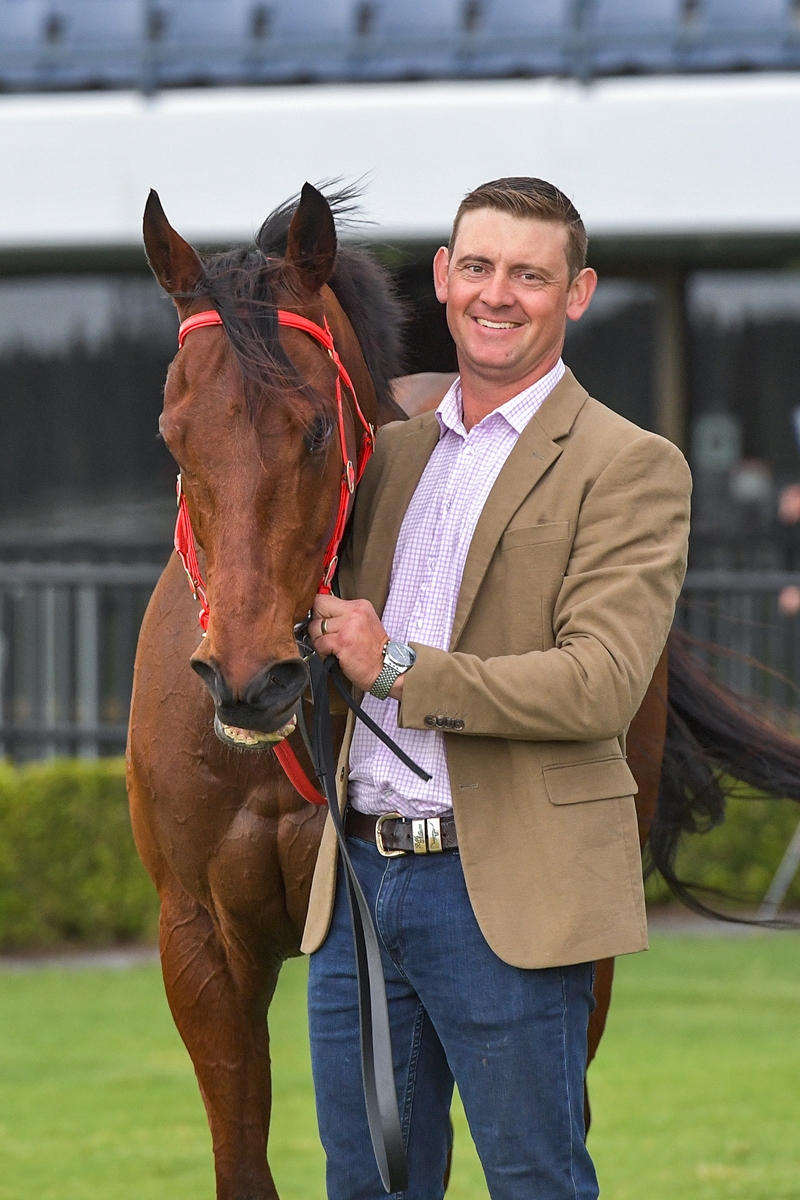 James Ponsonby with Obelos after the gelding had scored an upset win at Kembla Grange. Image by Bradley Photographers

Winning results with a Chris Waller cast-off in Obelos, combined with his excursions into the ruthless arena of tried horse sales couldn’t be more convincing. Or more promising.

“I’m from a racing family, I was foreman for two years with Mark Newnham but I was always going to train my own,” James enthused.

“We’re constructing a track and stables on our family farm at The Oaks, eight in work, always looking for more.” Ponsonby has been licensed for just a couple of months.

James has import Obelos, a former Waller six-year-old to be ridden by an established ally in Tom Sherry. A luxury 3kg claim for the talented Irish apprentice off 58.5kg is vital into a deep Class 3 on another tremendous day of Group racing.

“Our family was mainly into harness pacing, but a lifetime in horses. Our new training complex is just about complete and I’ve got a licence to train at Goulburn.

“Exciting times - buying this gelding and winning as well as he has. I’ve got an association with Tom (Sherry).

"I brought him to ride for us when I was working for Mark [Newnham] - he's an outstanding apprentice.”

So James, who purchased Obelos for a now brilliant bargain of $15,000, is certainly no wide-eyed newcomer to the biggest occasions at headquarters through his time with Newham.

Obelos is primed and weighted after lumping 59kg and 58kg for dominant wins at Albury and Kembla. And he drops a crucial 3kg with the Irish lad on Saturday.

Obelos, by New Approach (Ire) from Dahama (GB), has revived spectacularly after seemingly losing it completely and being banished to the sales.

After winning on debut way back in May of 2018 at Longchamps as a three-year-old and successive placings, Obelos was sold to Australian interests.

With the profile of a European winner and two placings, he was keenly sought by Aussie connections. And with the potential at three years, Obelos certainly wouldn’t have come cheap.

“I don’t honestly know what went wrong but I studied his background and bought him off the Inglis digital for $15,000,” James explained. “Cheap buy now, paid his way with interest.”

James set him to win at Albury and then a follow-up at big odds at Kembla. So Ponsonby couldn’t get back to familiar surroundings quick enough with his family shared import.

Meanwhile, after encouraging placings by Obelos on the Kensington Track and Doomben early last season for Waller, it was rapidly “all down hill” according to James.

Over to Keith Dryden, last season’s The Kosciuszko winner with Handle the Truth. “I’ve told my owners don’t ever expect to improve horses on Chris Waller.

"The key is placing them in their right grade when they decide they’re not city class. They don’t keep slow ones.”

Obelos isn’t in that category. As an experienced three-race winner he’s well placed in a Class 3 with the claim. The fact he closed strongly gives James confidence for the testing 1600m at headquarters.

“The weight drop is a bonus, he’s progressed, race fit and worked terrific. They usually run these Highways with a solid tempo. That’ll suit him out to 1600m and he can race on the pace.”

Ponsonby is “well aware” it’s a strong Highway with several last start winners: “Last prep he placed in the city, then for some reason lost it. But he came here in good order.

"We gave him a decent spell and he came back terrific. He was entitled to win that level at Albury but he took the next step at Kembla right up in grade.

"And Kembla form is strong for a Highway I think. That was our intention after he put those wins together.

“He’s a happy horse, maybe the environment, individual care and back in grade obviously. But he gives a good feel when I’m on him, I know that.”

Obelos is value odds at headquarters with an early track rating of good four in overcast weather.