Hardy 'Banking' On His $17 Shot In Rosehill Highway

Riverina’s Chris Hardy, a former bank employee and a one-horse hobby trainer who won his first race in four long years with Zakeriz, puts the pure essence of the TAB Highway series in perspective for Rosehill Gardens on Saturday.

“First time in town, only had slow ones for a long time, nothing anywhere good enough to try, but you live in hope of getting a decent horse," the veteran explained, perusing the banking sums as Zakeriz ($17 with TAB) jumps a grade from successive Albury wins into a lucrative $75,000 TAB Class 3 Highway (1400m).

"This bloke is in winning form and why not have a crack for that level of prizemoney? 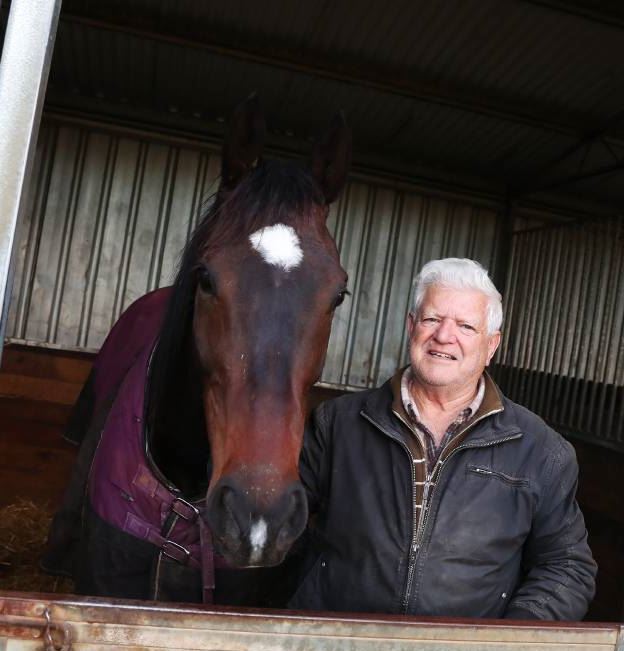 Trainer Chris Hardy with his pride and joy, Zakeriz. Image by Emma Hillier

“He’s only lightly raced at five - he’s had ongoing tendon issues and a long time off, but he’s a different horse his prep and there’s only one way to find out if they’re up to better grade.

"And he's eligible for that type of money compared to home.”

Zakeriz was unplaced at his first three starts after near 12 months off the tracks with issues.

“He’s owned by family and friends in a partnership. He put a couple together in easier grade, is well-weighted and he’ll handle a rain-affected track.”

Regular rider Richard Bensley makes the trip on 56.5kg with a vital inside draw in a capacity field. The Zariz gelding drops from 59kg and 58.5 kg off the Riverina double.

“He’s the best I’ve had in a really long time. I’m from Grenfell originally, worked in banks all over NSW and I’ve only trained part-time with one or two over the years.”

Zakeriz is off a recent modest Albury maiden win and a Benchmark 58 win, but is a logical outsider against the prolific TAB Highway winner Matthew Dunn, Matthew Dale with his numerous series wins, and strong credentials from the Cody Morgan and Keith Dryden stables.

But Zakeriz at least brings versatility, wet form and race fitness. Dunn’s topweight Rothenburg ($4.20 favourite), an impressive recent series winner, significantly was scratched from a far tougher Grafton Guineas on Wednesday but has drawn the extreme outside.

Meanwhile Hardy has the endurance test of a pre-dawn departure on race morning for the 460km, six-hour float trip from Wagga Wagga. Hardy isn’t familiar with the form of the opposition, just relying on his own.

“We know these races at tough to win against those strong stables, but he’s raced handy at 1100m, so from the good draw, you’d think he should hold a spot close enough at 1400m.

“Wherever he’s comfortable then it’s a matter if he’s up to them. But he’s race fit in winning form. That’s all you can ask.”

Rothenburg, the smart Dream Runner ($6.50) and Morgan’s Blazing Tycoon ($7), a recent series nomination but held back for Saturday, head the markets.

At present, Rosehill Gardens has been upgraded to a soft 6 after numerous heavy 8 and 9 ratings.