Plunge On Rising 11yo In Stayers Cup (Rosehill Gardens)

But Kris Lees considers DOUKHAN (having firmed from $15 into $7 on TAB fixed odds) has the right conditions to return to the winning list in the Stayers’ Cup (3200m) at Rosehill Gardens tomorrow.

The veteran stayer will have Blake Shinn aboard as he attempts to make amends for a photo-finish second to Plot Twist in last year’s race, which was run at Royal Randwick. 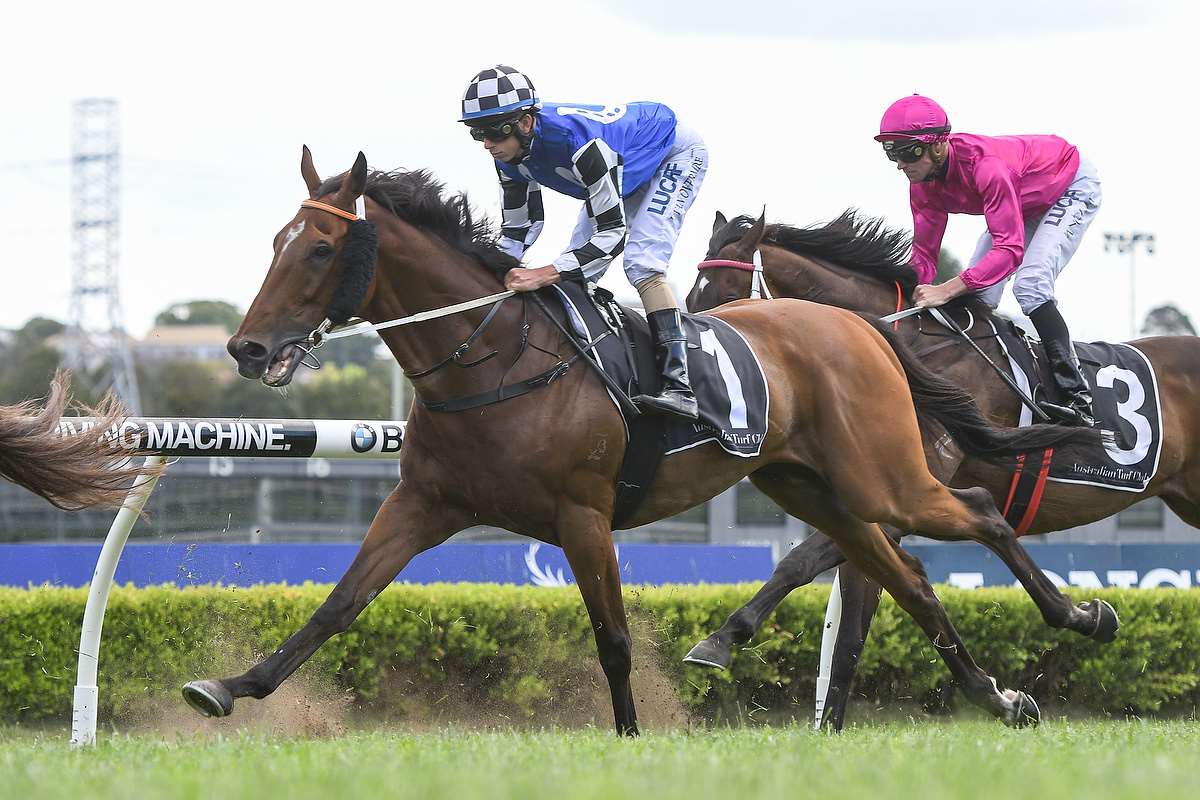 Doukhan (Jean Van Overmeire) on his way to scoring at Canterbury Park. Image by Bradley Photographers

In spite of his age, Doukhan has raced only 37 times compared with another marvel, Cup rival Destiny’s Kiss ($6.50), who is also rising 11 and remarkably is lining up for his 98th start.

“One of the main reasons for Doukhan’s longevity is that he hasn’t had a lot of racing because of injuries,” Lees said this morning.

“And we’ve managed him carefully by not running him whenever the tracks have been too firm.

“This is the race we have aimed him at this preparation, and the certainty of a heavy track means he is going to get conditions to suit. Doukhan is in great order, and I’m sure he will run well.”

Doukhan ran fifth to Shraaoh in the Group 1 Sydney Cup (3200m) at Randwick on April 13 on a Good 4 surface, and has raced only once since, humping 62kg from an outside barrier when unplaced over 2400m at that track a fortnight ago.

Rosehill this morning was rated a Heavy 9 with a penetrometer reading of 6.15, and Lees feels that will suit all his runners. These are his thoughts on the remainder of his representatives:

THINK FREE (Shinn, $8.50 into $6) in the Benchmark 74 Handicap (1400m): “She was quite impressive winning at Newcastle last time on soft ground. It’s a big step going to a Saturday race in town, but she is promising and I think she can handle it.”

ITZ LILY (apprentice Sam Clenton, $3.60 into $2.70 favourite) in the Benchmark 78 Handicap (1800m): “Has been up for a while, but continues to train well. She did a good job to beat her own age last start at Randwick and no reason why she can’t run well again although now against older mares.”

KOOL VINNIE (Clenton, $19) in the Benchmark 78 Handicap (1200m): “Is going to have to come wide from his awkward draw, but races well fresh and not without a hope.”

STAR REFLECTION (Christian Reith, $23) in the Listed Civic Stakes (1350m): “Performs well on wet ground and solid run last time when fourth here to Passage Of Time. Up in class and yet to win at Rosehill but has been placed at the track and always capable of an upset.”

CLEVANICC (Shinn, $13) in the Benchmark 78 Handicap (1500m): “Good wet tracker who has had two trials to prepare him for a resumption. I feel he is in for a nice preparation and can run well although naturally, he will take improvement from the outing.”