Zalatte Not To Be Forgotten

In 2015 it was the preparation outlined for Winx. Last year it was Unforgotten. Zalatte has big shoes to fill when she kicks off her campaign in the G1 Surround Stakes (1400m) at Randwick but Chris Waller knows she is a potential top liner in her own right.

Zalatte will tread the tried path of the G2 Phar Lap Stakes, G1 Vinery Stud Stakes and then tackle the G1 Australian Oaks. It’s a campaign that has historically produced some of the best horses Waller has trained. 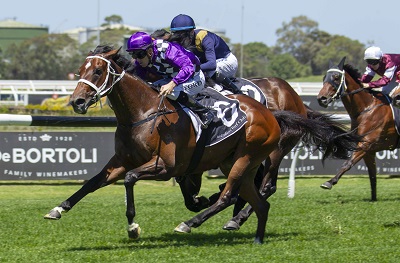 In 2017 it was Foxplay. After winning the Phar Lap, like Winx and Unforgotten, she failed to stay the 2000 metres in the Vinery but dropped back to a mile to win the Queen Of The Turf at her subsequent start. Zalatte should have no such worries, being out of Zabeel mare Za Star.

“Zalatte is a talented filly and we are following a similar path to the likes of Unforgotten and Winx in previous years,” said Waller.

“I think she will be vulnerable over 1400m first up but she has drawn well and will be charging late. She is certainly a horse to follow from our stable going towards the Vinery and Oaks. She has come back well after a short break.”

The three-year-old is undefeated in three starts, which includes a 1400m victory over Baller. It has only been seven weeks since we saw her win at Randwick over 1600m but Waller is no longer daunted by the short turnaround.

“We had to make sure we are in the big races. Ideally we’d have given her a longer spell but we’ve learnt that you’ve just got to make do with time so they can be running in Oaks,” he said.

TAB punters appear to share Waller’s enthusiasm for the Zalatte, with her price halving from $26 into $13 since markets opened on Wednesday.

Waller has four runners in the field, spearheaded by Fiesta at $5, a first up winner of the $1m Inglis Sprint beating Estijaab, while Madam Rouge and Melt round out the team.

“Fiesta’s first up run was brilliant and she’s a really good horse as we’ve seen over the past year. A two-year-old, early three-year-old and she has come back and won a good prize money race,” said Waller.

“The 1400m is no problem, the barrier draw is my only concern but hopefully we can overcome that. She’s a leading chance.”

Fiesta drew barrier 15, while Melt didn’t fare too well either in 14. Madam Rouge on the other hand will jump from barrier 3, having been pinched by Nakeeta Jane late in the Light Fingers Stakes.

“It would be nice to get some cover from a better draw on Saturday, if (Madam Rouge) gets that cover she’ll settle well and be in the finish,” said Waller.

“It is hard to analyse that first up run, whether she got any favours or whether it is going to flatten her second up but to me she looks strong and ready to go again.”

“(Melt’s run) was okay, she was a bit fierce, I think she will settle better in her second Australian run and if she can, she will be competitive.”

Check out the fields, form and replays for Randwick on Saturday.