Yes, An Everest Win's Better Than A Group 1 For Star Colt

The lone three-year-old in Saturday week's $14m TAB Everest is not just there to make up the numbers but to make a statement that could shake up the way the breeding industry thinks. 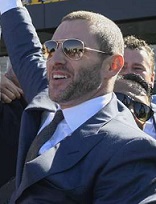 Part-owner Brae Sokolski said all concerned with the colt are rapt to be in the Everest and he feels a win by Yes Yes Yes would surpass a Group 1 not only in achievement but in status.

"We’re not attuned to considering the Everest a stallion making race because it’s been won by a gelding in its two editions,'' Sokolski said.

"In time this will be seen as the ultimate stallion making race and I would love Yes Yes Yes to be the first to prove that.

"A three-year-old Group 1 in the spring is considered the ultimate for a stallion but I think that conventional wisdom will make way once this race has more history behind it.''

There has been one three-year-old in each edition of the TAB Everest to date – in 2017 Coolmore filly Tulip ran fifth behind Redzel while last year Graff, in the Max Whitby slot, also filled fifth placing behind the dual winner.

Yes Yes Yes is also part-owned by Coolmore and the colt will wear blinkers in the TAB Everest with champion jockey Glen Boss booked to ride.

He ran a close second to Godolphin's Bivouac in the Group 1 Golden Rose (1400m) three weeks ago at just his second run back from a spell so he's reaching the Everest in peak fitness.

"It’s an enormous achievement in itself having a horse that’s considered good enough to race in what’s effectively the best sprint race in the world,'' Sokolski said.

"So that’s an honour but we’re not there just to make up the numbers.

"We legitimately believe he is a contender and the one thing I am certain of is of all horses in this race we have the most upside.

"We’ve got the X-Factor, all these horses’ form is exposed. Back to 1200m, 53kg, blinkers on first time there’s this unknown quantity about him that makes him a highly exciting leftfield element.''

It's been quite a week for Sokolski who celebrated a Group 1 win with comeback galloper Kings Will Dream at Flemington last week, a Group 2 with Verry Elleegant at Randwick and now a TAB Everest runner.

Waller believes Yes Yes Yes can be competitive against the world’s best sprinters at Royal Randwick on October 19.

“I have been extremely excited by the way this colt has continued to progress through his short career to date,’’ Waller said.

“I have been incredibly pleased with what he has shown me over the past six weeks and am extremely confident he can acquit himself under weight for age conditions against an outstanding field of open age sprinters.

“Yes Yes Yes is an exceptional talent and I am eager to see him perform in The Everest.”

The sole three-year-old in Australia’s richest race is an $11 chance with TAB.

Sokolski said, assuming he comes through the TAB Everest well, Yes Yes Yes will press on to the Group 1 Coolmore Stud Stakes in Melbourne two weeks later for another shot at a spring Group 1.