Let’s set the scene now because THE race of the Star Championships will be Group 1 $4m Longines Queen Elizabeth Stakes (2000m) after arguably the two best horses in the world – Verry Elleegant and Addeybb, Addeybb and Verry Elleegant – upstaged Golden Slipper Day with their stirring battle in the Ranvet Stakes at Rosehill Gardens.

Rarely do races truly live up to the hype – it happens but it doesn’t happen that often – but the Group 1 $700,000 Ranvet Stakes (2000m) delivered on the promise and then some. 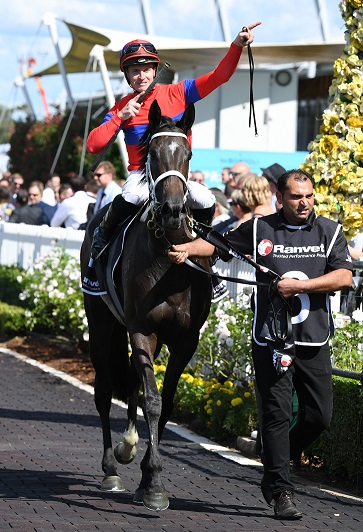 Verry Elleegant took the scoreline to 1-2 as she defied Addeybb’s attempts to fight back, as he did a year earlier, and claimed her eighth Group 1.

“It’s what horse racing is all about, two world class animals up against each other and fighting it out,” she said.

“It did pan out to be the two horse race everyone thought it would be. All eyes on the Queen Elizabeth now.”

As Addeybb set out after the leader Angel Of Truth a fair way from home Verry Elleegant’s jockey James McDonald made a decisive move to lose half a length and come off the fence before laying down his challenge early in the straight.

McDonald must have had flashbacks from 2020 as the UK star refused to go away under riding from Tom Marquand but this time around the mare prevailed and didn’t the champion jockey love it.

“I haven’t had that much fun on a racecourse for a very long time. It was so much fun,’’ McDonald said.

“Halfway up (the straight) I could feel her at her top and he was still there and I was thinking, ‘on no, not again’.

“But she’s just a wonderful mare, great determination, fantastic will to win and she knows where that winning line is. She’s just a mighty mare.”

It was trainer Chris Waller’s 120th Group 1 win and one of his most satisfying, not only because of the occasion but because of how he’s nurtured Verry Elleegant from a wiry mare who wasn’t quite all there to a reliable powerhouse.

He’s not underestimating his rival, though, when it comes to the return bout in three weeks knowing that last year Addeybb improved over two lengths between the Ranvet and the Queen Elizabeth.

He said it would be unlikely the five-year-old will back up next week to defend her Group 1 Tancred Stakes title.

“She’s a great horse and it’s always hard to gauge when you’re running against horses from the other side of the world who has been flying the flag up there so proudly and beating some good horses,” Waller said.

“Well done to Mr. Haggas for sending him down because it’s not an easy feat.

“I thought we would win the race easily. And he fought back at the 300m when we headed him last year and it was the same thing unfolding.

“James didn’t pull the trigger as early this year, but when he went she quickened and he started coming back. So I was thinking ‘oh it’s on again’ but gee she was tough the last 100m. She’s a world class horse.”

TAB reacted to the Ranvet result with Verry Elleegant firming into $3.50 second favourite while Addeybb retained his place at the top of the market at $3.

The Addeybb camp, as disappointed as they were with going under, is confident there’s improvement in their horse so bring on the Queen Elizabeth.

“He’s run a huge race, Tom was happy enough with him and it sets him up perfectly for the next race,” Paul said.

“He should definitely come on from that.”

Earlier in the day, Haggas defended the Group 3 Manion Cup (2400m) with the lightly raced stayer Favorite Moon emulating Young Rascal from a year ago and likely booking his spot in the Schweppes Sydney Cup.

Here’s what Tom Marquand, and all the beaten jockeys in the Ranvet had to say.

Tom Marquand (Addeybb): “Delighted with the run. As we kept saying before if we bump into her at her best it’s going to be tough to beat her. He gave his all. This was always going to be a run up to a bigger day and he put his heart and soul into it.”

Kerrin McEvoy (Angel Of Truth): “Great run. Nice and fit and loved that ground. Out further in trip will suit him now.”

Glen Boss (Sir Dragonet): “He ran well. Still a little bit fresh which surprises me. That is the run that gets us back in the ballgame heading toward the Queen Elizabeth. With 250m to go he was surging to go with them but then he plateaued. He kept whacking along.”

Hugh Bowman (Colette): “She didn’t really have the best run. She was game but winners were too strong.”

Kathy O'Hara (Cliffs Of Moher): “A bit outclassed in that field.”