Trainer Pat Webster believes in rewarding hard work and that’s why he didn’t think twice about jockey Travis Wolfgram continuing his association with the lightly raced Kosciusko at Randwick on Thursday. 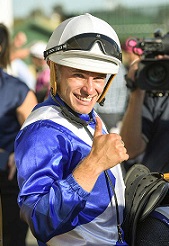 Wolfgram has been on board the four-year-old in all three starts, for two wins, and Webster has confidence in the young rider to get the job done in town.

“My wife said to me you’ve got Tommy Berry, Blake Shinn and James McDonald sitting in the Sydney jockeys' room (without a ride) and you put Travis on,’’ Webster said.

“He’s very clean and fit and he rides 54kg without wasting. He works really hard, he’s managing himself and he works hard.

“When I see that in someone I try to put them on and give them a go.’’

Webster is best known to the public as the trainer of Happy Clapper but he’s better known to the industry as someone who cares about and mentors other racing participants through his welfare role at Racing NSW.

It’s a behind the scenes job so plenty of time goes into talking to jockeys and he said the 24-year-old stands out to him because he doesn’t stand out in the room.

“You get to watch them and pick up on little things, I watch him and he minds his own business and goes about it in a tradesman-like way,’’ Webster said.

“That’s the sort of person I want on my horse.

“He’s probably the next notch down but given the opportunity he could be a bit higher up. And Gerry likes to reward people when they work hard too.’’

Gerry, of course, is well known owner, breeder and businessman Gerry Harvey and Webster said it’s the patience he always shows his horses that has allowed Kosciusko to emerge as a late season four-year-old.

The gelding only made his debut back on February 2, winning a 900m maiden, and he’s now reaching a trip his pedigree suggests he should relish in the Battle Of Messines Handicap (1400m).

“He’s had a lot of soundness issues and that’s the reason it’s taken so long to get him there,’’ Webster said.

The four-year-old overdid it in front in his only defeat, on a wet track at Gosford, and Webster said he and Wolfgram learned he’s better off being ridden quietly.

That paid off when he scored a soft win, off a six week break, over 1300m at Hawkesbury on April 16.

“I was determined to ride him in behind, I’ve been experimenting with him and now we’ve got him settled and a bit of racing into him,’’ he said.

Kosciusko wins at Hawkesbury on April 16

“I used it as a fitness step to get up to the 1400m because it wasn’t a hard run for him. He had a bit of a look at the winning post.

“I’ve been happy with him since the run so I’m looking forward to seeing how he goes at the 1400m.’’

Kosciusko – not to be confused with the spelling of The Kosciuszko race – was $4.20 second favourite with TAB on Tuesday behind the unbeaten Wolfe ($1.85) who was placed behind Happy Clapper in his latest trial.

Meanwhile, Happy Clapper has been in the paddock for a week and Webster is already campaigning to get the rising nine-year-old a slot in The Everest later this year.

Until that happens though Happy Clapper will likely resume in the Group 1 Winx Stakes (1400m) in August – where a win would be appropriate given how many rumbles he had with the champ.