By Brad Gray
At Kembla Grange

Mister Sea Wolf had to lump 59kg and break the Kembla Grange track record, but that’s exactly what the classy eight-year-old did in taking out the first running of The Gong (1600m).

Quackerjack, with 52kg on his back, travelled wide the trip and was brave in running a narrow second while Star Of The Seas claimed third. Race favourite Luvaluva was presented with her chance but could only get into sixth.

“He has been a good import for us and it’s fantastic to take out the first running. We’ll be back here year in and year out,” said Chris Waller’s racing manager Charlie Duckworth.

“There is a reason why he was the top weight because he was the class horse in the field, he was made to carry the weight but he justified why he had the big weight. 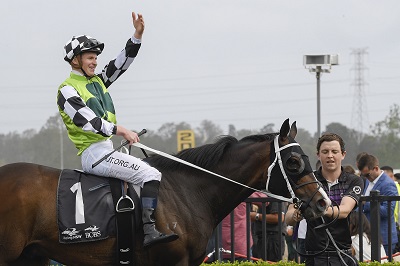 Taking out the $1 million feature caps an incredible carnival for the Waller stable, having also won The TAB Everest, Golden Eagle and Epsom.

“It’s been an amazing spring. A few people probably thought we’d have a bit of a lull after Winx but Chris has proved with his systems, and with the support of all of his owners, that we can continue to be in the headlines,” said Duckworth.

“You’ve got to remember that whilst Winx was racing we had plenty of horses running second to her so with or without he we still would have won more Group Ones.”

Winning jockey James McDonald made it a week-to-week double having also taken out the inaugural running of The Hunter at Newcastle last Saturday on Savatiano.

“The atmosphere is incredible here, last week I said after The Hunter that the spring just keeps rolling on and it's a fanatic opportunity for everyone to get involved. It's great fun,” said McDonald.

“I was a little bit worried the last furlong (with Mister Sea Wolf), the first furling into the straight I was very happy but thought I might be a sitting duck but he soldiered on really well.”

Check out the results and replays for Kembla Grange on Saturday.