Unparalleled experience, unique skills and an unquestionable willingness to share them are among the many qualities that have led to the selection of David Merrick as the winner of the Thoroughbred Excellence category of the 2019 Godolphin Stud and Stable Staff Awards (GSSSA).

The naming of Merrick as the supreme award winner acknowledges a lifetime in the thoroughbred industry, the past 26 years of which have been spent at Widden. 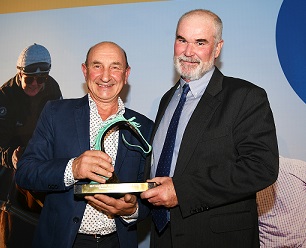 For Merrick, his latest recognition follows his naming in 2018 as winner of the Hunter Thoroughbred Breeders’ coveted Murray Bain Award that honours “the outstanding achievements of those in our industry who champion exceptional service and hands on practice.”

“I’ve worked in the industry for 40 years and to achieve some recognition for the work you have put in is a great result,” said Merrick.

“I’m in absolute shock. There are such incredible people who work in this industry and to get recognition is a real boost.”

“It has been amazing. It’s a great feeling and I encourage everyone to get behind the Awards next year.”

Merrick’s nominator, Widden manager Derek Field, praised him for his leadership, dedication and “a total involvement in every aspect of the business at any time of the night or day, year-after-year.”

“David’s passion and time and his selfless attitude of forever giving is something he should be proud of,” Field said.

“His one-on-one relationships with our clients are testimony to the regard in which he is held and the utmost trust and respect of all who work with him.”

“David has devoted his life to the breeding industry.”

Merrick is one of seven award winners who were chosen from a record 150 nominations from every Australian state and territory representing every area of the industry.

The Thoroughbred Excellence Award winner received a trophy and $5,000 in addition to their prize for winning their category, plus an additional $2,000 to fellow workers.

The full list of Award winners chosen by a panel of industry leaders:

The GSSSA, sponsored by Godolphin and partners throughout the industry and convened by Racing Australia and Thoroughbred Breeders Australia, aims to recognise and reward those who work in all areas of the thoroughbred racing and breeding industry.

The GSSSA were devised by Godolphin’s founder Sheikh Mohammed to recognise that stud and stable staff who are the backbone of the horseracing industry.

Godolphin sponsors the GSSSA in five countries in the belief that hard work and dedication of grooms, exercise riders, office workers and foaling crews - the list of unsung heroes within the industry goes on and on – should be celebrated.