What You Missed - Winx Stakes Day

Libertini Launches In Silver Slipper
Libertini was brilliant in her return at Randwick.

The filly ran her last 600m in 32.74, via Punters Intelligence, and did it largely untouched. It was only the closing stages when Tommy Berry asked for a final effort, with the daughter of I Am Invincible running 11.07s for her last 200m.

Godolphin filly Flit turned in a perfect launching pad for the rest of the Princess Series getting out over further, clocking 32.55s for her last 600m.

“Like a lot of good horses it actually feels like you’re in slow motion," said Berry, "She quickens without you even feeling it and that’s why I had a look at the big screen to see how far they were away."

Libertini in the yard and the punters continue to back her. 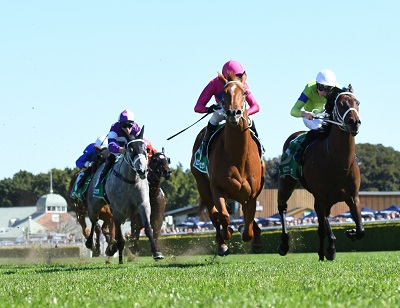 That was Chris Waller's immediate thought after the colt won the Up And Coming Stakes in the stewards room, after Superium was first past the post.

“Probably not toward the Golden Rose. I think he can measure up against the better horses at some stage as a three-year-old,” said Waller.

“He’s still very green. He’ll eventually end up racing with blinkers on. He’s not quite ready for them yet. He does a few things wrong, gets a bit keen. He’ll furnish into a decent horse.”

The Golden Rose is certainly on the agenda for Superium, however, and Glen Boss expects the Joe Pride galloper to be even better over further.

"He went to the barriers like a different horse to his first up run, still does things wrong, he’s got a little bit of upside, both fitness levels and mentally," said Boss.

“He’s a quality individual, especially when he gets out over a mile. He’s a really nice horse.”

Give Verry Elleegant Another Chance
"She’ll improve off it and don’t give up on her."

“She’s returned okay," said McDonald, "She’s just a bit more dour and I had a few concerns about that regarding today’s race. Her work suggested she wants a mile, mile and a half."

"They are just a bit sharp for her now, I think even at a mile they might be a bit quick for her, especially against these tough older horses."

To the eye she tacked on very late and Punters Intelligence reveals her last 200m of 11.38s, just a length off the quickest which was Avilius (11.20s). Chris Waller indicated that they may have to rethink original plans with the four-year-old, instead targeting races over further.

Five To Follow
Outside of the winners there were a stack of great runs from horses set for big carnivals.

Superium - Lost out in a protest to True Detective but it's all upside for this three-year-old, especially out in trip as Glen Boss suggested after the race
Con Te Partiro - The blinkers did the trick for this mare. She was momentarily held up but speared through late in the Show County
Cascadian - This French import paraded with plenty of improvement so what he produced on his Australian debut suggests he's a live Epsom player, running his last 600m in 32.31s
Flit - Libertini stole the show but the way Flit hit the line late suggests she will thrive over further. Very smart filly
Kings Will Dream - Avilius gets a big tick screaming home his last 600m in 32.85s but the return of King Will Dream from a fractured pelvis on the back of one quiet trial was outstanding

Check the results and replays for Royal Randwick.