What You Missed - Tancred Stakes Day

When Chris Waller wins the Phar Lap Stakes with a filly you can take it as given that filly is a Group 1 horse in the making – and we saw it again as Hungry Heart took out the $500,000 Vinery Stud Stakes (2000m) at Rosehill. 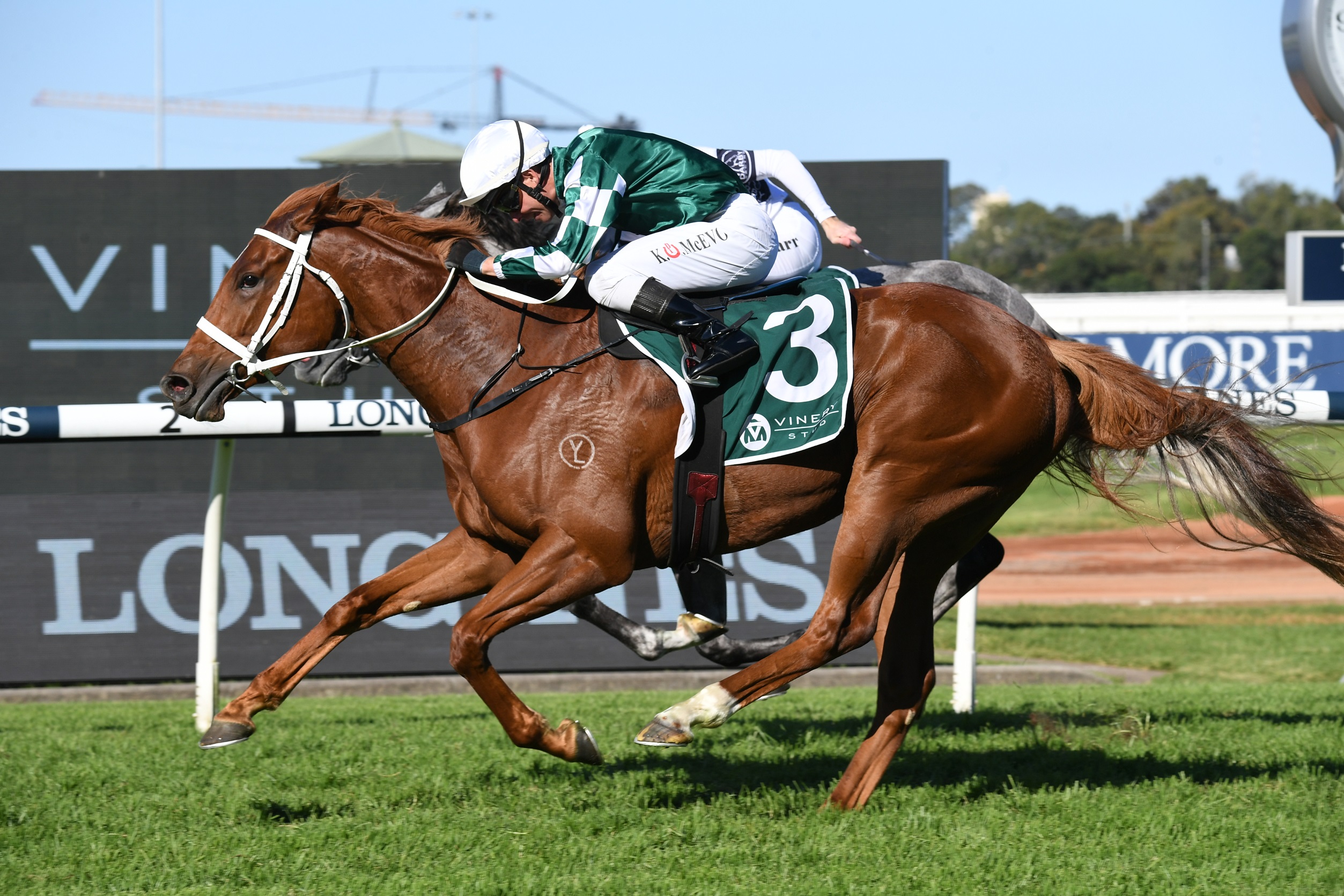 Hungry Heart staged a big performance to come from last and run down the favourite Harmony Rose in the last 100m, Waller suggesting the confidence gained from her Phar Lap win kicking in late.

“No matter what sport you’re in, or even just everyday life what confidence does,’’ Waller said.

“I think that win last start was a big help, and to me today that last 100m she could’ve easily run second but she really stuck her head out and tried her guts out. So it was pretty brave.”

Waller said he’ll let the dust settle on whether Hungry Heart is tested at the 2400m of the Group 1 $1m Australian Oaks on April 17 but trainer Mark Newnham said it’s full steam ahead for the runner-up Harmony Rose.

Punter’s Intelligence sectional data showed the grey did a bit of early work, running 10.80 from the 1800m-1600m, and it appeared that told on her in the straight despite kicking clear of the field on the bend. She ran the last 400m in 25.36 compared to Hungry Heart’s 24.41.

“They are two superior fillies, they beat the rest out of sight. She went fantastic, she just didn’t win.”

Harmony Rose is a $5 chance in the Oaks with Hungry Heart moving onto the $6 line. Miravalle drifted from $11 to $26 after finishing last in the Vinery.

“I’m not sure what happened there,’’ Newnham said.

“She got into a forward spot which is unusual for her and then was gone a long way from home.”

Jockey Tom Marquand is rapt with how Addeybb came through his first-up second in last week’s Ranvet Stakes and is confident the UK star is on track for his Group 1 $4m Longines Queen Elizabeth Stakes defence in two weeks.

He visited Canterbury early in the week to see how the gelding pulled up from his gallant performance when edged out by Verry Elleegant in his first run since October.

“We literally trotted and hacked, it looked like he has pulled up really well out of the run,’’ Marquand said.

Addeybb improved a couple of lengths between the Ranvet last year and the Queen Elizabeth, if you pay attention to his winning margin in both races, so Marquand says he will improve again.

Interestingly, though, he gave some insight into the thinking and expectation around the horse this time around given his standing in world racing from his 2020 deeds.

“It’s a frustrating thing in the fact we got beaten but if we had that run a year ago we’d be thinking happy days coming into the Queen Elizabeth,’’ he said.

Addeybb and Verry Elleegant are $3 equal favourites for the rematch at Randwick on April 17.

Dragonet Earns Another Crack At Superstars At Randwick

Sir Dragonet finished a few lengths behind the superstar pair in the Ranvet Stakes last week but was back to his best as he demolished his rivals in the Group 1 $1.5m Kia Tancred Stakes (2400m) at Rosehill on Saturday.

"They probably didn’t go quite quick enough for him last week and the other horses were a little bit zippy. And he was also chasing Verry Elleegant.

"On his day, depending on conditions, the more work you give this horse the better he is.

"The more racing, the deeper into a prep the better he is. His manners were really good today, spot on, so he should be pretty right in a couple of weeks time.”

He firmed into fourth elect at $11 with TAB in the Queen Elizabeth after beating the mares She's Ideel and Miami Bound.

The Tancred was jockey Glen Boss's 90th career Group 1 win and Sir Dragonet became the first Cox Paate winner to take out the race in the same season since Octagonal won his first Tancred in 1996.

Winners might be grinners but trainer Bjorn Baker was beaming after She’s Ideel produced a slashing Sydney Cup trial with her game second behind Sir Dragonet in the Group 1 Kia Tancred Stakes (2400m).

The mare was on the back-up after a luckless third in the Epona Stakes, a Group 3 race for mares, on Golden Slipper Day and should have been out of her depth at weight-for-age given she has just 50kg in a Sydney Cup.

“She’s going to go into the Sydney Cup and be hard to beat. It was a good ride by (Jason) Collett, a week can make a big difference.”

Baker said initially he planned to take the traditional Sydney Cup route with She’s Ideel, $15 with TAB in the two mile feature on April 17, and head to the Group 2 $300,000 Chairmans Quality (2600m) next weekend but is certainly pleased he didn’t.

Third placed Miami Bound also put herself into the Sydney Cup picture with an improved performance, pleasing trainer Danny O’Brien, after beating just one home in the Ranvet a week earlier.

Kim Waugh left Rosehill content she has talented mare Great News exactly where she needs to be to give the Wyong trainer an elusive Polytrack Provincial Championships Final win after her narrow defeat on Saturday.

While Starspangled Rodeo did just enough to hold off Great News in the Cleanaway Handicap (1400m), the four-year-old tightened her grip on the $500,000 feature run at Randwick on April 17 as the $3.20 favourite with TAB.

Waugh said having to do some early work from an awkward gate probably cost Great News at the finish.

"I'm so happy, she needed that run. It's been three weeks since she raced and that'll top her off nicely going into the Final,'' she said.

"A little bit of pace on and she drew wide so she just had to do that bit of work for a bit longer than we hoped. But she never gives up and she fought well."

Meanwhile, the Paul Perry-trained La Jolie Fille took out the last Qualifier at Kembla Grange on Saturday and was installed as a $26 chance in the Final alongside the placegetters Darleb and Liveinthefastlane who also earned their ticket.

Trainer Greg Hickman hasn’t picked an easy assignment for Eleven Eleven’s first Group 1 attempt but how the gelding performs in next Saturday’s $2.5m TJ Smith Stakes (1200m) will shape the rest of his season.

Eleven Eleven, $26 with TAB in the all-in market, will be asked to take on the likes of Nature Strip, Bivouac, Eduardo, Masked Crusader and company in the sprint feature of The Star Championships.

He hasn’t raced since winning three straight in the summer, culminating in the Magic Millions Cup in January, and Hickman said the timing is right to throw him in the deep end.

“It’s going to be a pretty hot race this year, no walk in the park for anyone,’’ he said.

“His preparation has been pretty much perfect, he’s worked well (Saturday) morning and looking enormous.

“If he comes out and runs a really good race then we change our plans. If he doesn’t we’ll go on and probably have a go at the Stradbroke.”

Hickman’s former star Pierata ran fifth in the 2019 TJ Smith and fourth in the race behind Nature Strip last year but Eleven Eleven has been more a work in progress than his now retired ex-stablemate.

“He is a slow maturing horse, he was a handful as a colt, and it’s taken a while to have a bit of trust in everyone and do the right thing,’’ he said.

“It’ll be a hot pace and he’ll be hitting the line.”