What You Missed - Randwick July 6 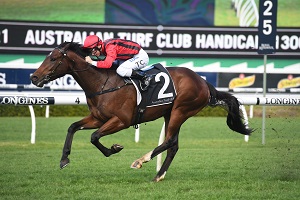 "We think he'll get a mile and 2000m, time will tell, but this is the day that Thinkin' Big ran on last year and he was able to get to a Derby," said jockey Tim Clark, who rode Thinkin' Big in his Victoria Derby campaign.

Clark controlled the middle stages of the race running his 1000m to the 400m in a leisurely 36.97s (Punters Intelligence) before putting the race away between the 400 and the 200m just as he did on debut at Canterbury.

"He might have been getting a little bit tired 1100m to 1300m on such a testing track but I'm sure he's got a lot more to come," said Clark.

Co-trainer Adrian Bott said Rule The World will now have a brief let up before returning for the likes of the Gloaming Stakes and G1 Spring Champion Stakes.

Sir Elton Still Standing After Randwick Test
Adam Duggan was preparing to turn his phone off again after Sir Elton made it three straight, such is the interest in the undefeated horse from potential suitors and breeders.

Duggan said the rising four-year-old is likely to have one more run before the Gosford-based trainer aims Sir Elton up at a $200,000 Inglis race in February.

"He may have one more run then a break and we'll bring him along slowly, he is a big, heavy horse," said Duggan, who is reluctant to spell him for too long.

Champion hoop Hugh Bowman certainly wasted no time getting back among the winners.

"It was nice to come back with an odds on favourite, the pressure was to get the job done but the horse has been in fine form, is lightly raced and certainly has a bright future judging by what I just felt," said Bowman.

"What I was so impressed with was the way he went forward, set up a position and relaxed well. That gives him great scope to get over further which will open a lot more doors for him, not only that, the way he let down when I asked him to."

That’s three from three for Sir Elton and welcome back Hugh Bowman! 🚀 pic.twitter.com/MN6HNOpHyb

German Mare Commands Attention
Kris Lees admitted he had no idea what to expect from imported mare Attention Run on her debut for the stable, but is now eyeing off black type races. 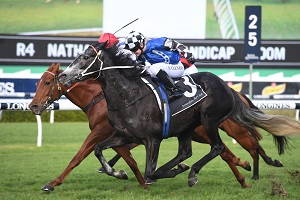 After looming into the straight it looked as if she had dropped off but surged again late to get over the top of more fancied runners Monsieur Sisu and Sweet Victory.

"I had an open book coming here because I didn't know what to expect from her, and on the heavy ground," said Lees.

"You never really know until you try them race day. She had a few little issues and took a while to adjust to the Australian weather and lifestyle but she has come around slowly.

"I thought whatever she did today she'd improve on. She got that really good tempo up front which suited her as she probably lacks a turn of foot but when they rolled she was able to build momentum."

Lees is hopeful Attention Run will develop into a Listed or Group Three level 2000m horse in time.

Ljungberg's Randwick Reward
Ron Quinton knows Ljungberg will be hard to place going forward but it's a nice problem to have.

The three-year-old popped in behind the leaders before accelerating clear to win comfortably. It took a while for the leaders to sort themselves out but that didn't stop Charretera and Bangkok running along at a good clip in front.

Punters Intelligence further reveals that Ljungberg's winning last 600m section was 37.14s! It was a slog home. Ljungberg was the only runner to break 13s his last 200m (12.88s).

"He had a nice soft run and was entitled to accelerate the way he did, Sam (Clenton) didn't panic so it was all good," said Quinton.

"He is a horse that could end up winning a nice little sprint race somewhere and here's to hoping he does."

Check out all the replays and results for Randwick.