What You Missed - Randwick January 12

Miss Looking Fabulass Ahead Of Autumn
Turnberry added his name to Kris Lees' autumn team with stable rep Cameren Swan revealing that the tough four-year-old would now be freshened up for the Provincial Championships series.

"He is a much better horse when he has something to chase down, with a bunny," said Swan.

We've already seen stable star Le Romain at the trials but it won't be long before we see Graff, In Her Time, Miss Fabulass and El Dorado Dreaming have a spin around at the trials too. The set at Newcastle on January 22 is pencilled in for them all.

"(Miss Fabulass) looks fantastic, we've just got to get her to settle a little bit," said Swann, "Where she goes in her preparation will be determined by how she settles. They are all ticking over really well."

"Graff looks really sensational and his work is just starting to step up."

Rumble In The Jungle
Jungle Edge lost the battle but not the war in the Summer Sprint (1000m).

The speedster was collared late by Single Bullet, giving away a whopping 12.5kg to lose by 1.3L. Jockey Chelsea Hall was rightly full of praise after the race.

"He tried really hard and I thought when Badajoz came up to him for a stride that he was going to give in but once he headed him he tried again. I'm so rapt with how tough he was with that weight. It was a massive weight difference," boasted Hall.

Punters Intelligence reveals that Jungle Edge went a surprisingly slow tempo for the first section of the race with a 24.69s for the first 400m (Badjoz was 24.72s). That explains why the last 600m of all five runners were so slick.

Jungle Edge in the yard ahead of the Summer Sprint at @royalrandwick! @tabcomau @7horseracing pic.twitter.com/IegyCVEI7j

Road To Champs Starts For Williams
Danny Williams was a very satisfied trainer after the return of his Country Championship contenders Acquittal and Highway Sixtysix at Royal Randwick. 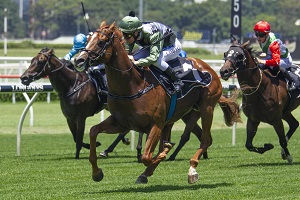 Acquittal, finishing third, was the pick of them and only had the one jump out prior to the run.

"Neither of them are 1000m horses but they raced very fresh, as you could see from their antics when they went out onto the track," said Williams, "They are two nice horses, just raw. There is so much improvement there."

Tom Marquand rode Acquittal and added, "He ran a blinder but the first half told, not having had a run for so long and then the second half he galloped on nicely. He wants further again."

On the winner Star Fall, we'll need to get used to seeing duo Maher and Eustace training winners in Sydney having recently secured boxes at Warwick Farm. The stable have a huge opinion of this three-year-old.

And for Exceltic? Sam Weatherly quipped, "Just too sharp and too short, he was off the bridle the whole way but really closed off strong and 1200m next time he'd be hard to beat."

What's A Brow Band?
You might have noticed the day's TAB Highway Handicap winner Smart As carried a piece of gear you don't see all too often. A brow band. So what does it do exactly? 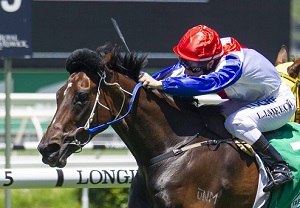 The brow band on Smart As (Pic: Steve Hart)

"It is supposed to stop them from rearing in the barriers," explained Smart As' trainer Garry Kirkup.

"Joe Pride had it on so I wasn't going to change it. The horse has a barrier blanket too. You don't change things if they are running well."

The brow band is also a tool to get horses to carry their head more economically in the run.

Linda Meech, who rode a double, winning the first two races at Randwick, carried out the instructions to a tee.

"Garry said she is pretty one paced so whatever speed she is going in the run she can't go much quicker in the straight so a gave her a little click up at the 600m and she just kept finding," said the hoop.